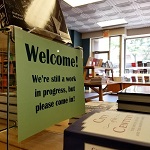 The Book Table in Oak Park, Illinois, has opened its new addition.

After raising $50,000, The Book Table in Oak Park, Illinois, opened its new addition. This expansion has increased the size of the store by 50 percent.

A Book for All Seasons recently moved to a new location in Leavenworth, Washington.

Busboys and Poets’ 5th & K location in Washington, D.C., will be moving up the block. The new location will have room for Busboys’ companion bookstore and is scheduled to open in September.

Empire Books and News in Ashland, Kentucky, has been acquired by Geek Inc.

Bards Alley in Vienna, Virginia, has joined the 2,000 Libros Donation Campaign with DC Books to Prisons, a project of the Washington Peace Center to send books to undocumented children who have been separated from their families at the border.

Interabang Books is the “hub” of the literary scene in Dallas, according to Texas Highways.