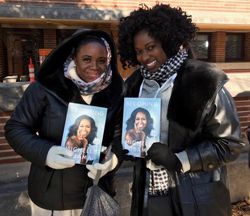 Readers at the Seminary Co-op's event with Michelle Obama

At The Fountain Bookstore in Richmond, Virginia, owner Kelly Justice tweeted her displeasure about the number of shoppers “showrooming” at the store over the weekend, a tweet that went viral and inspired a story in The Guardian.

A Freethinker’s Corner opened in Dover, New Hampshire, in August. Foster’s Daily Democrat cited the store as being part of a “small bookstore revival.”

Malaprop’s Bookstore/Café opened a pop-up store in the Center for Arts & Inspiration in Hendersonville, North Carolina.

Philadelphia magazine interviewed the owners of the new Pennsylvania bookstore A Novel Idea on Passyunk, newlyweds Christina Rosso-Schneider and Alexander Schneider. The store will hold its grand opening on Friday, January 4.

Quartzy featured Eso Won Books in Los Angeles, California, in an article titled, “How One of America’s Oldest Black-Owned Bookstores has Endured in the Amazon Age.”

The Story House, a bookmobile that travels around Montgomery County, Maryland, was featured in local news.

Powell’s Books Events Coordinator Jeremy Garber was interviewed by Oregon Public Broadcasting, and JustLuxe included the store on a list of 10 things to do in Portland, Oregon.

New Hampshire’s Union Leader talked to Gibson’s Bookstore owner Michael Herrmann about the importance of shopping local during the holidays.

Mclean & Eakin Booksellers offered up a list of the top 10 Michigan-based books for 2018 and was profiled by Petoskey News.

Fast Company listed 61 indies to shop at this holiday season.

TroyMedia and the Times Colonist encouraged consumers to shop at local bookstores.