For several years running, booksellers in New England have been celebrating Cider Monday on the Monday after Thanksgiving, this year November 30. During the event, booksellers offer apple cider and a warm welcome in their stores to attract holiday shoppers away from online retailers on what is traditionally known as Cyber Monday.

Vicky Titcomb of Titcomb’s Bookshop in East Sandwich, Massachusetts, shared a press release on NEIBA’s listserv inviting all booksellers to join in the fun of Cider Monday. In East Sandwich, a dozen businesses will be serving cider alongside Titcomb’s.

“It’s one of the simplest, most fun, and most clever ways to promote shopping locally I’ve seen,” wrote Titcomb, who added that Cider Monday serves to “remind shoppers that there is a better, more personal alternative to Cyber Monday.”

As noted in the press release, on Cider Monday, “shoppers are promised cider, smiling servers that will not crash, personal service and advice, the opportunity to touch and try before adding to their cart (err… armful), no logins or passwords to remember, payment in cash if desired, and always free freight. Simply take your purchases home with you at no extra charge.”

Cider Monday originated at Toadstool Bookshop, which has three locations in New Hampshire. 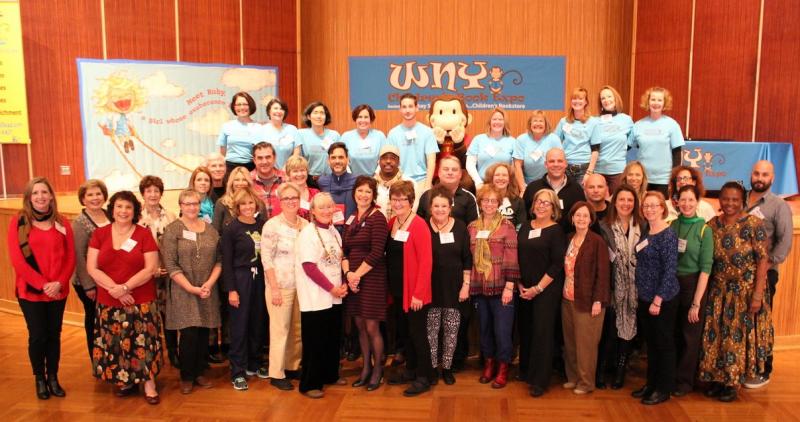 Monkey See, Monkey Do staff members along with more than 30 authors at the WNY Children’s Book Expo

More than 1,500 readers attended the inaugural Western New York Children’s Book Expo in Buffalo, New York, on November 14. The event was organized by Monkey See, Monkey Do...Children’s Bookstore, which is co-owned by Kim Krug and her mother, Kathleen Skoog.

Funding for the event came from a grant from author James Patterson, as well as support from 47 local sponsors and 110 volunteers.

The free event for children aged 3–12 aims to help them recognize the power of literacy in accomplishing their own potential. Thirty-one local, national, and international children’s book authors and illustrators attended, with many coming ahead of time to give presentations at area elementary and middle schools.

Ollie’s Other Place, a spinoff store established by Vermont Book Shop owners Becky Dayton and Jenny Lyons, will open in Middlebury, Vermont, on November 28, reported the Addison Independent. The store is named after Dayton’s dog, Ollie.

The new store will specialize in select classic and children’s gift books, plus creative and educational toys, games, and gifts for babies and children. Quality toy brands will include HABA, Folkmanis, tegu, Pal Socks, and more.

In Oakland, California, Kathleen Caldwell is celebrating 10 years at the helm of A Great Good Place for Books, reported the Daily Democrat. Caldwell, who was working as the events planner at the bookstore in 2005, inherited the store from owner Debi Echlin when she died.

“It was never in my game plan to own a store, but now it feels like this was meant to be,” said Caldwell. “I’m throwing a party on November 28 with cake and refreshments for friends, writers — and the whole community.”

Caldwell credits the success of the bookstore to customers’ growing understanding of supporting local businesses. “People are more committed to shopping locally. They know that if they don’t support independents that we won't be here,” said Caldwell.

“The store is known for a diverse selection of books for adults and children, and for hosting readings by notable authors,” the paper said, highlighting the bookstore’s “Live from Prairie Lights” reading series, which features up-and-coming and well-established authors and poets from all over the world.

Last month, Kevin Cannon, an illustrator and cartoonist local to Minnesota, drew a different bookstore from across the state each day in October to create an illustrated poster of local indie bookshops, reported Minneapolis City Pages.

Cannon undertook his project as part of InkTober, an annual tradition begun in 2009 to challenge artists all over the world to hone their skills by creating a new ink drawing daily and then share them on social media. Cannon reached out to followers on social media to get recommendations for bookstores to draw. “People just flooded me with all these great ideas for Twin Cities bookstores and stores in Duluth and Stillwater, places I hadn’t been to. It was an eye-opening experience,” he explained.

The poster features stores such as Wild Rumpus, Once Upon a Crime, Red Balloon, Valley Bookseller, and Subtext Books. To create the bookstore illustrations, Cannon visited several shops and used photographs and Google Street View to visualize the others. The first printing of the poster has sold out, and another run is on order.