Bookshop Santa Cruz in Santa Cruz, California, celebrated its 50th anniversary with a community-wide birthday celebration on November 4–6. Festivities kicked off on Friday evening with the sharing of five birthday cakes, one for each decade in business, with customers, friends, and family. 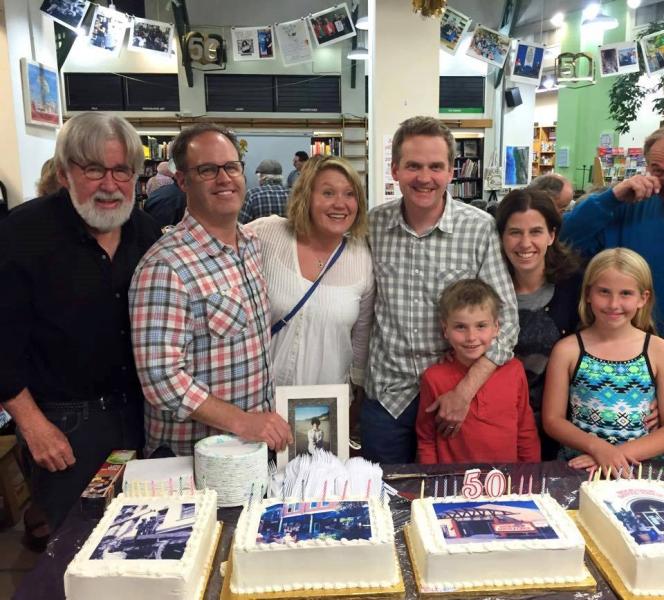 Bookshop Santa Cruz opened on November 6, 1966; in 2006, Casey Coonerty Protti took over management of the business from her parents, Neal and Candy Coonerty.

Other anniversary festivities included a performance by the Hot Damn String Band and a proclamation from Santa Cruz Mayor Cynthia Mathews. Throughout the weekend, customers were treated to a 20 percent off sale, commemorative “Home is where your bookstore is” buttons and bumper stickers, and a grand prize of 50 books hand-selected from the store’s 50 Notable Works from the Past 50 Years lists for one lucky customer.

The river’s end bookstore in Oswego, New York, will open its doors to a cash mob on November 16 as part of an effort to bring together the local college community and townspeople in support of Oswego’s downtown businesses, reported the Oswegonian.

The cash mob was organized by students from Oswego State’s literary citizenship class, who are advertising to bring out community members and fellow students to support the store; this year, the class also reached out to Oswego Mayor William Barlow and other small businesses.

Bookstore owner Bill Reilly, who moved to Oswego 25 years ago and opened the store as a way to connect with the community, has worked to make his relationships with Oswego State successful and beneficial to the store, he told the Oswegonian.

“The fact that the literary citizenship class had adopted the bookstore has simply been beyond our wildest dreams,” Reilly said.

Iowa City’s Prairie Lights Books has been named best bookstore for the second year in a row by the Iowa City Press-Citizen.

“Beloved by readers and writers in Iowa City and well beyond, Prairie Lights is the top pick in this category once again,” the Press-Citizen wrote.

In addition to highlighting Prairie Lights’ staff selections as a great place to find new reads, book buyer Paul Ingram’s recommendations corner on the store’s website, and the internationally known reading series “Live from Prairie Lights,” the newspaper noted, “The store is known for a diverse selection of books for adults and children, and for hosting regular readings by notable authors.”

The mural features the spines of Charlotte’s Web, To Kill a Mockingbird, The Giver, and the Holy Bible, among other favorites, as well as books by local authors. The mural is 61 feet wide and the tallest book is 11 feet tall.

Elliott took three weeks to finish the mural, which is getting lots of positive attention, said owner Shane Gottwals. “It seems like every other day every customer that’s coming through the front door is raving about the mural. So, if anything, it will in time draw more people in.”

“This strip of Riverside Drive gets so much attention,” he added. “There’s so many cars driving by, and we’ve been trying to figure out a way to really showcase what we do at Gottwals Books.”