The Chicagoland Independent Bookstore Alliance (ChIBA), a group of more than 20 Chicago-area independent bookstores, is launching new programs to support indie bookstores and educate consumers about the consequences of their shopping choices.

“Amazon’s growing dominance in our economy is eroding opportunity and endangering community life in our towns and cities,” said Nina Barrett, owner of Bookends & Beginnings in Evanston, Illinois, a member of ChIBA. “As independent bookstore owners, we place ourselves at the forefront of efforts to shift money back to local businesses.”

The Chicagoland Independent Bookstore Alliance formed earlier this year after Amazon announced plans to open a bricks-and-mortar store in Chicago’s Lakeview neighborhood in 2017.

Madison, Connecticut’s R.J. Julia Booksellers announced that it will operate the new Wesleyan University bookstore, to open on Main Street in Middletown in late spring 2017. Work will begin on the 12,000-square-foot store this month.

Middletown city officials approached Wesleyan administrators with the idea of locating the university’s bookstore on Main Street, viewing it as a way to strengthen ties between the campus and the downtown.

Roxanne Coady, CEO and founder of R.J. Julia Booksellers, said the commitment of Wesleyan, the city of Middletown, and the Middlesex Chamber of Commerce to opening a bookstore that will serve the college and the town’s residents is inspiring.

“Together we can create the kind of bookstore that will be the new standard for a college bookstore that is an integral, active member of its town,” said Coady. “We will bring our 30 years of experience as knowledgeable booksellers to create a vibrant author series and a place for discovery, enlightenment, entertainment, and contemplation. We are honored to be part of this exciting partnership.”

BookCourt owners Henry Zook and Mary Gannett are retiring and closing the Brooklyn bookstore on December 31, reported Gothamist. The couple opened the store in September 1981.

In response to the store’s upcoming closure, author Emma Straub and Michael Fusco-Straub, her husband, announced they are planning to open Books Are Magic bookstore in the same general neighborhood. Straub and Fusco-Straub have spent the last few months planning and securing initial funding for the store.

“In addition to being my former employer, and the site of all five of my book launch parties, BookCourt is a part of our daily family life,” Straub wrote in a blog post. “A neighborhood without an independent bookstore is a body without a heart. And so we’re building a new heart.”

On December 17, Stax will hold its inaugural author event. Jon Land, author of 25 thriller and suspense novels, will visit the store to promote The Rising, co-authored with Heather Graham (Tor Books), publishing in January. 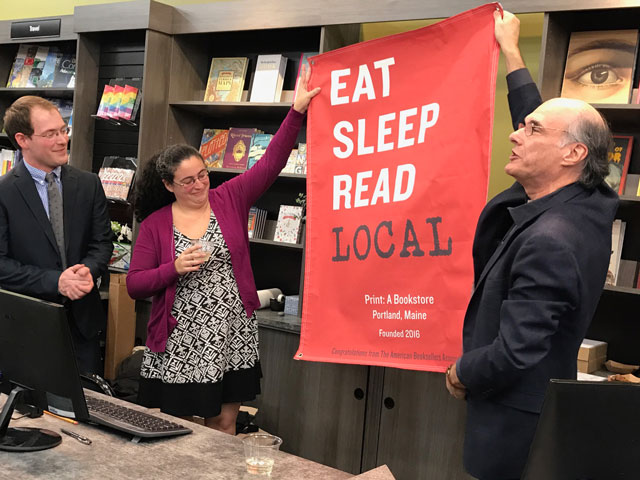 Russo, who previously worked for Greenlight Bookstore in Brooklyn and The Odyssey Bookshop in South Hadley, Massachusetts, and Christie, who was a longtime bookseller at Sherman’s Books and Stationery locations in Maine, opened the general-interest bookstore in November.

The Regulator Bookshop in Durham, North Carolina, marked its 40th anniversary on Saturday, December 3. As part of the celebration, Regulator raffled off $40 gift certificates throughout the day and served anniversary cake from the local Ninth Street Bakery. A display of memorabilia let customers grow nostalgic about the community bookstore, which also donated 10 percent of sales from the day to literacy groups The Durham Literacy Center and Book Harvest.

In an e-mail to customers ahead of the event, Regulator owner Tom Campbell thanked all the people who helped sustain the bookstore for four decades: “Thank you, so very much, for your support of this special space for books, reading, friendship, and conversation. The Regulator has always been an ongoing collaboration between those of us who run the store and our customers and community. It is quite literally true that without you, there would be no us.”

A big anniversary party with refreshments and local authors will be held February 18.

New and used bookstore Ukazoo Books in Towson, Maryland, is planning to relocate, reported the Baltimore Sun. The bookstore opened in Dulaney Plaza in 2007 and will move just a couple of miles away to Loch Raven Boulevard in mid- to late-January.

The new location, which will feature lots of parking and more manageable rent, will place the bookstore next door to Tunes, a used CD, DVD, video game, and LP retailer.

Last month, MIT Press faculty and students as well as others in the Cambridge, Massachusetts, community celebrated the grand opening of the MIT Press Bookstore’s new location, reported MIT News. The store had been on Main Street in Kendall Square since 1980; its new 2,350-square-foot location is just a few blocks away, on Massachusetts Avenue.

The store carries MIT Press titles and books of interest to the MIT community. The grand opening featured a demonstration of the press’ new Espresso Book Machine.

“During these past 14 years, our hearts and minds have been rewarded beyond what we ever dreamed, and we want to express our deepest gratitude for all that the bookstore has brought to our lives,” Costa and Levinson wrote in an e-mail to customers. “What a privilege it has been to be members of the remarkable tribe of authors, booksellers, publishers, and readers. All these relationships and activities have been interwoven with books, which we have come to believe are among the most powerful and sacred objects in the world.”

“The Last Words,” a farewell event taking place on December 28 at The Dance Palace, will feature Costa and Levinson in conversation with Malcolm Margolin, founder and publisher emeritus of Heydey Books. The event will focus on their experiences in the world of bookselling and will be followed by dessert and dancing.

After their departure, Costa and Levinson plan to continue working with nonprofit Black Mountain Circle and will dedicate a portion of the revenue from the sale of Point Reyes Books to strengthening and expanding program offerings.

Chloe Eudaly, owner of Reading Frenzy bookstore in Portland, Oregon, will close the store effective January 1, reported Willamette Week. Eudaly, who won a seat on Portland’s City Council during last month’s elections, is shuttering the store in order to follow a city rule that prohibits a government commissioner from having an outside job or owning a business.

“It’s been a good run, Portland. And who knows what the future may hold for Reading Frenzy, but for the time being the shop is going on hiatus,” Eudaly shared in a statement. “There is a chance it may reemerge in a new form later this year but that plan has not taken shape enough to share.”

“I’m excited to get down to business on City Council and work for a more equitable, inclusive, just, prosperous, and vibrant city for all of us,” she added.

On December 2, Bookshop Santa Cruz in Santa Cruz, California, filmed its version of the mannequin challenge in the store and shared it in a Facebook video.

The video, which currently has more than 15,000 views, features, among store staffers, Neal Coonerty reading the Constitution in front of the bookstore’s Don’t Give Up! Read Up! display, owner Casey Coonerty Protti snapping a selfie, and Coonerty Protti’s kids checking out the store’s children’s offerings.