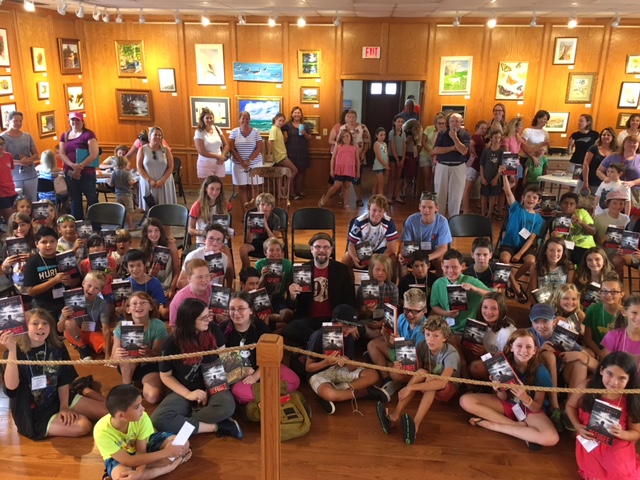 Author Alan Gratz poses with young readers at the launch of his novel "Refugee" and Downtown Books' One Summer One Read program.

Several local sponsors, including the Manteo Rotary Club and the Bryan Cultural Series, helped fund the program, which has 75 participants. Meetings on three upcoming Mondays will be held at different area elementary schools and will be facilitated by Dare County elementary and middle school media coordinators.

The store’s One Summer One Read program launched with an introductory meeting at the Dare County Arts Council in Manteo. Led by Gratz, the meeting also included remarks from staff from the Interfaith Refugee Ministry in nearby New Bern, who talked about what a refugee is and how someone might find themselves becoming one. After the event, Gratz signed books for several hours at Downtown Books, said Anderson.

Laties was the owner of The Children’s Bookstore in Chicago in the 1980s; founding manager of the Eric Carle Museum Bookshop in Amherst, Massachusetts; co-founder of the Vox Pop performance-café, bookstore, and publishing company; manager of the Bank Street Book Store in New York City; and is the author of Rebel Bookseller (Second Story Press).

Brilliant Books‘ is celebrating its 10th anniversary this December, and the Traverse City, Michigan, independent bookstore is asking customers to send in their personal stories and memories of the store. The July 21 edition of the Brilliant Books newsletter included the following request to customers, accompanied by a prompt to email the store:

“The thrill of opening all the perfectly chosen books you’ve gotten as a member of Brilliant Books’ Monthly Book Club? Tell us about it! That time ‘I’ll just stop by for that one book’ turned into an hour-long conversation with one of our booksellers? We’d love to hear your thoughts. Your stories are what makes up our story as the Nation’s Long Distance Local Bookstore. We wouldn’t be celebrating this milestone if it weren’t for your continued support.”

BookPeople to Serve as Official Bookseller for Texas Book Festival

BookPeople in Austin, Texas, will serve as the official and main bookseller for the Texas Book Festival (TBF), TBF organizers announced Tuesday.

BookPeople will also partner with TBF year-round as the bookseller for literary events, including the 2017 Festival Weekend, the Texas Book Festival Gala, and any TBF events in Austin at which book sales will occur. Events will also include a day where a percentage of the BookPeople’s sales will benefit a specific festival outreach program.

This year’s festival, which features a lineup of 275 writers, takes place on November 4-5 on the grounds of the State Capitol and on Austin’s Congress Avenue. Book sales for participating writers will be available at a main adult book sales tent, a children’s book sales tent, and a cooking tent as well as designated indoor venues.

Additionally, for the first time ever, people who cannot attend TBF can pre-order signed copies of select authors’ books and pick them up at BookPeople afterward, or have them shipped anywhere in the world. A percentage of book sales from the weekend will go back to TBF to support its mission and programs.