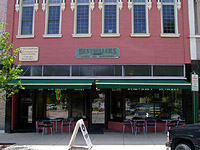 Eleven years ago, Jamie Robinson, a third-generation retailer, and her husband, Scott, an experienced retailer himself, launched the 800-square-foot Bestsellers Bookstore & Coffee Co. in Mason, Michigan. Since then, the business has more than tripled in size, with further expansions in the works. The Robinsons also own Darrell's Market & Hardware, a family business established in 1945 near Mason.

Their son, Jared Browers, now manages the bookstore. "He's been in retail since he was old enough to put on an apron," said Jamie Robinson. "He's been running the business the last three years." 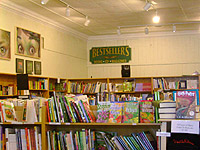 About the bookstore's beginnings, Robinson explained, "We started tiny and brought in beautiful fixtures from Franklin fixtures. We made it look good. Ingram set us up with our opening inventory. And four years later, we bought a building, expanded to 2,500 square feet, and added an espresso bar and a full service cafe." The store now stocks approximately 10,000 titles and specializes in general interest, children's, and regional books.

Bestsellers Bookstore uses Book Sense fliers, with its physical and web address stamped on them, as bag stuffers and to distribute at book-related fundraising events. It has had significant success with the Book Sense gift card program and reached a store best this past Christmas season. "We sold 150 gift cards in one day," said Robinson.

The Robinsons recently bought a building on either side of the bookstore's current space. In one, they plan to open a high-end deli, wine, and cheese shop, and in the other they'll expand the bookstore another 1,200 to 1,400 square feet. The bookstore and the expansion space were once one retail location, and doorways connecting the two spaces are just dry walled over. "It was once one big hardware store," said Robinson. "So it'll be much easier to expand there." 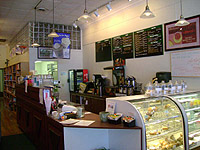 For Robinson, adding a full cafe was somewhat inevitable given her experience owning and operating Darrell's, which offers a catering service and prepared food. "I've been in the food business my whole life, so adding food service to the bookstore wasn't a big deal." It turned out to be both an easy and profitable decision. "When we put in a cafe, our books sales doubled. We went from having 3,000 people on our ... mailing list to more than 6,000 in a year -- and this in a town of 7,500. People who'd never bought a book from us before started coming in for the good coffee."

The 120-year-old brick building that houses Bestsellers Bookstore & Coffee had been a hardware store for 70 years and following that a print shop. When the Robinsons took over, they completely gutted and renovated the structure, which overlooks the courthouse square. The overall effect is dramatic. One admirer, visiting author Chris Bohjalian, asked Robinson, "Do you realize what you have here? This is one of the top three most beautiful courthouse squares in the country. Has Hollywood found out about you yet?"

Maybe Hollywood hasn't discovered them yet, but Michigan's governor has. Gov. Jennifer Granholm recently chose to hold a community roundtable discussion at Bestsellers Bookstore & Coffee at the recommendation of state Rep. Barb Byrum, a longtime customer, said Robinson. "We had Governor Granholm, the mayor, and about 20 community leaders. Attendance was open to anyone. Anyone could ask a question."

Other scheduled events include serving as the booksellers for the local library's panel discussion of Mason's community read title, Al Gore's An Inconvenient Truth (Rodale), which will also include forum discussions and more on environmental issues.

As Bestsellers Bookstore & Coffee has grown in square footage and sales, the Robinsons have also focused more attention on green issues, both in the bookstore and in the cafe. They added a "Going Green in 2008" books category on their BookSense.com website and changed all their 60-plus spotlight bulbs to energy-saving fluorescents. At the cafe, "We recycle almost everything," said Robinson. "A local gardener picks up our coffee grounds and we have a big, covered Rubbermaid bin where we put all of our compost, and a farmer picks that up, too." --Karen Schechner