Binc’s Heads or Tails Game at Wi14 Raises $7,559 for Booksellers in Need

The Book Industry Charitable Foundation’s “Heads or Tails” fundraising game at this year’s Winter Institute in Albuquerque, New Mexico, raised a total of $7,559 for the organization. 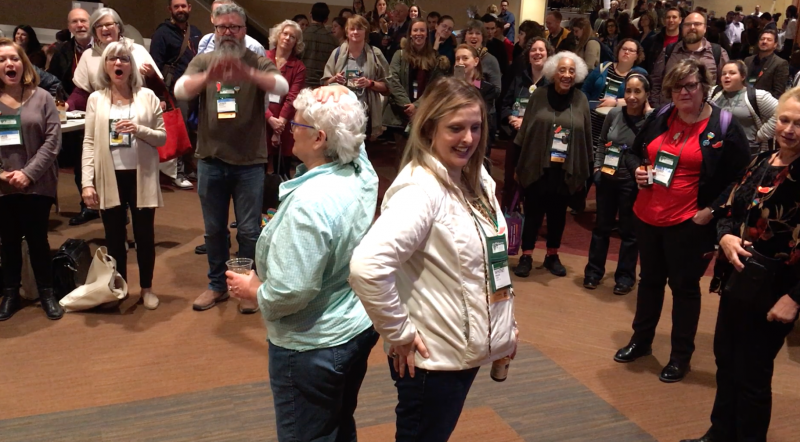 Booksellers and others attending the institute could choose to purchase one or more flashing pins for the chance to guess the results of a series of coin tosses and raise money for the organization, which helps booksellers in need of emergency financial assistance. Last year’s winner, Gibran Graham, owner of The Briar Patch in Bangor, Maine, served as host and flipped the coin at this year’s event, held Friday, January 25, during the Winter Institute Closing Reception.

Out of hundreds of participants, Whitney Balaun, business development specialist with LIBRIS, was the winner of the night’s grand prize, a $500 American Express gift card. However, Balaun was playing as a proxy for a bookseller: Deon Stonehouse, who co-owns Sunriver Books & Music in Sunriver, Oregon, with her husband, Rich. Stonehouse donated her winnings, in full, back to Binc, increasing the total raised from $7,059 in pin sales to $7,559 overall.

“Because the ABA so generously underwrote the cost of Heads or Tails again this year, all proceeds will benefit booksellers,” said Binc Executive Director Pamela French. “We would like to thank each bookseller, publisher, author, and Wi14 attendee who played the game with us. The generosity of our shared community will help four booksellers and their families get through a financial crisis.”

Binc has hosted “Heads or Tails” games at bookseller conferences for the past two years, including at last year’s Winter Institute in Memphis, which raised $7,676, and last year’s Children’s Institute in New Orleans, which raised $1,116; these proceeds have allowed the organization to cover multiple grant requests for booksellers. In advance of the evening’s event, Binc staff and selected volunteers sold the pins, which were shaped like chili peppers and hot air balloons to represent Albuquerque’s unique charm and culture. A $20 donation bought one flashing pin, giving the purchaser a single chance to play and win the grand prize, and $35 bought two pins, equal to two chances to win.

To play, everyone who bought a pin stands up, a coin is flipped, and each person publicly indicates their guess by placing their hands on their “head” (head) or “tail” (backside). Each flip eliminates those who guessed wrong, and the last person left standing wins the game.

To donate to Binc, visit the organization’s website. Booksellers who are currently in need of emergency assistance can contact Binc at (866) 733-9064 or help@bincfoundation.org. In addition, Binc is currently accepting applications for higher education scholarships for booksellers’ dependents, as well as applications for a professional development scholarship for one bookseller to attend the Denver Publishing Institute.