BookPeople Celebrates Distinction as PW's Bookseller of the Year 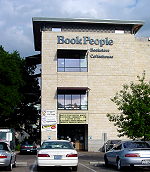 Steve Bercu, co-owner of the self-proclaimed "Largest Bookstore in Texas -- A Community Bound by Books," received a call about a month ago informing him that BookPeople had been named Publishers Weekly Bookseller of the Year. The 24,000-square-foot store, originally named "Grok Books" when founded in 1970, has been an Austin landmark for decades and is a founding member of the city's influential Austin Independent Business Alliance (AIBA). The AIBA, and Bercu in particular, are credited with keeping a Borders store from opening across the street from BookPeople.

According to Bercu, the award is meaningful to everyone connected to the store, as well as other community businesses. "We decided to celebrate this high accolade by congratulating ourselves and having a party," he said. The party was held on Monday, April 25, and was attended by all of Austin's literati and then some. The evening included speeches by Austin's mayor, the aptly named Hon. Will Wynn, local authors, and other supporters.

PW recognized BookPeople as its Bookseller of the Year for, among other things, its outstanding events, both authored and authorless; frequent contests; cheerful salespeople, and 150,000 titles. Bercu's philosophy includes ongoing discussions with the staff of 85 about books and about store improvements. He encourages employee creativity, even allowing them to create their own displays in assigned sections of the store. Some unorthodox, (read "weird"), aspects of the store include events schedules posted in the store's bathrooms and a legendary party for a book about a murder committed by a former BookPeople manager.

Bercu acknowledges the importance of all local independent businesses to BookPeople's success. AIBA, which was spearheaded by Bercu, has made its "Keep Austin Weird" campaign a readily adaptable rallying cry for communities around the country that are trying to maintain individuality through locally owned businesses, vibrant town centers, and restrictions on behemoth chain stores.

Now with 350 members, Bercu told BTW, AIBA has "distributed 145,000 bumper stickers [with the slogan]. "We're hearing about places all over that are using the Keep 'something' Weird line," he said.

Publishers Weekly will honor BookPeople and its Rep of the Year, Charlie Boswell of Heinecken & Associates, at ABA's Celebration of Bookselling on Friday, June 3, at BookExpo America. --Nomi Schwartz

(To learn more about BookPeople and AIBA, go to news.bookweb.org/read/1413.)