A successful Banned Books Week 2018 concluded on Saturday, September 29, after a weeklong fête that saw booksellers, librarians, publishers, and readers around the country celebrate the freedom to read. The 2018 theme, “Banning Books Silences Stories,” served as a reminder that everyone needs to speak out against the tide of censorship.

Booksellers celebrated this year by engaging communities in important discussions about censorship and free expression. Store windows and booksellers’ social media pages were decked with displays promoting Banned Books Week and highlighting banned and challenged books, and booksellers hosted and participated in creative events to promote the freedom to read. 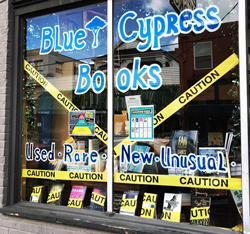 For Blue Cypress Books in New Orleans, Louisiana, a crucial part of the store’s annual celebration involves engaging the community in dialogue about banned books. General Manager LeeAnna Callonde told Bookselling This Week that in addition to the store’s window display featuring this year’s top 10 banned books, conversations with customers provide an opportunity to raise awareness about censorship.

“It never ceases to amaze me how many people don’t know that books are still being challenged,” said Callonde. “Every year I have people who see our Banned Books Week display and say ‘People still ban books? Where?’ or ‘I can’t believe that book was banned! Why?’ I will take any opportunity to educate people on the dangers of censorship. People in our community are always ready to learn and to get behind a worthy cause.” 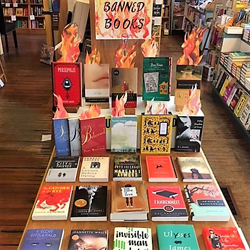 Suzanna Hermans of Oblong Books & Music in Millerton and Rhinebeck, New York, finds that many people don’t realize that books are still banned and challenged in communities around the country. “Now, more than ever, it’s important to stand up for the right to read freely, and Banned Books Week helps bring awareness to this important issue,” she said.

During its celebration this year, Oblong received a positive response from customers, Hermans said, who “are excited to see the books on display, and often have lively discussions with our staff about the books’ content. And, best of all, the books are selling!” 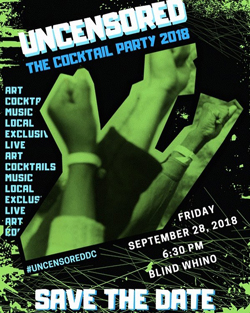 Solid State Books in Washington, D.C., participated in the D.C. Public Library’s #UncensoredDC Scavenger Hunt, in which banned books were hidden throughout the city, and UNCENSORED: The Cocktail Party, which featured banned book-themed cocktails, live music performed by local artists, and a pop-up market with local retailers.

Banned Books Week was launched in 1982 in response to a sudden surge in the number of challenges to books in schools, bookstores, and libraries. Typically held during the last week of September, it highlights the value of free and open access to information. Banned Books Week brings together the entire book community in shared support of the freedom to seek and express ideas, even those some consider unorthodox or unpopular. By focusing on efforts across the country to remove or restrict access to books, Banned Books Week draws national attention to the harms of censorship.

American Booksellers for Free Expression encourages all participating bookstores to continue to share photos of their displays and events using the official hashtag #BannedBooksWeek, as well as to send a description of their activities to abfe@bookweb.org.