The Children’s Book Council and Every Child a Reader have unveiled the official 2017 Children’s Book Week poster, commemorating the 98th annual celebration, which runs from May 1 to 7. Designed by Christian Robinson, the poster features this year’s Children’s Book Week slogan, “One World, Many Stories,” highlighting the power of books to unite readers of all backgrounds. 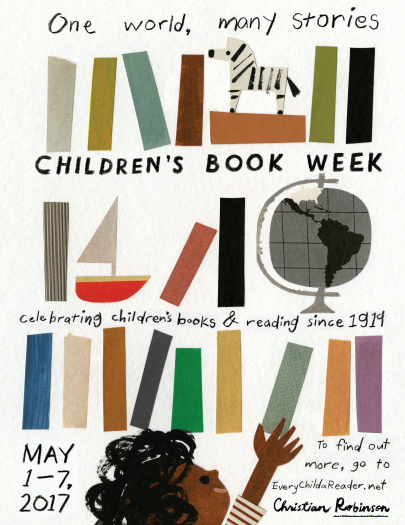 Robinson is the artist behind such picture books as Little Penguins by Cynthia Rylant (Schwartz & Wade) and Last Stop on Market Street by Matt de la Peña (G.P. Putnam’s Sons Books for Young Readers), for which Robinson received a Coretta Scott King Illustrator Honor and a Caldecott Honor.

Registration to be an official event location for Children’s Book Week is now open online. Every Child a Reader is seeking 500 locations from all 50 states, including schools, libraries, and bookstores, to host dedicated story times, activity hours, book award voting time, or author/illustrator events. Hosts will receive the Children’s Book Week poster and access to downloadable materials, plus inclusion in a national publicity campaign. The deadline to sign up is March 1.

February 5 is the deadline for librarians, teachers, booksellers, parents/caregivers, and children’s book bloggers to submit a title for consideration for The Anna Dewdney Read Together Award.

Sponsored by Penguin Young Readers, the Children’s Book Council, and Every Child a Reader, the Anna Dewdney Read Together Award will be given annually to a picture book published within the last five years that is both a superb read-aloud and also sparks compassion, empathy, and connection. The winning book will be announced during Children’s Book Week, May 1–7.

In the letter, which was leaked to Buzzfeed, Reidy writes that Simon & Schuster “do[es] not support or condone, nor will we publish, hate speech. Not from our authors. Not in our books. Not at our imprints. Not from our employees and not in our workplace.”

In December 2016, it was reported that Yiannopoulos had scored a $250,000 book deal for his proposed book, Dangerous, from Threshold Editions, a conservative imprint of Simon & Schuster that envisioned the book as an examination of issues surrounding free speech and political correctness. The announcement triggered an outpouring of anger and criticism from the public, including a letter of protest to S&S from more than 160 authors, as well as responses from a number of booksellers, including The Booksmith in San Francisco, which made the commitment not to carry the book, to cut orders of S&S titles by 50 percent, and to donate proceeds from S&S titles to the ACLU.

According to Reidy’s summary of the project’s background, Threshold Editions is editorially independent, so its acquisitions are made without the involvement or knowledge of other S&S publishers; however, it is S&S’ responsibility as a publisher to work with Yiannopoulos. While the book will go forward, Reidy acknowledged that the company had heard and appreciated all of the impassioned responses it has received from authors and readers. Reidy offered reassurance that none of Simon & Schuster’s imprints will publish books “that we think will incite hatred, discrimination, or bullying.”

See the full text of the letter here.

Starting February 27, Ben Sevier will be the senior vice president and publisher of Grand Central Publishing, a division of Hachette Book Group.

Sevier succeeds Jamie Raab, who is stepping down as president and publisher of Grand Central Publishing, which publishes both fiction and nonfiction for a diverse audience under imprints that include Twelve, Grand Central Life & Style, and Forever.

Sevier, who will also join Hachette’s executive management board, previously worked at Dutton, an imprint of Penguin Random House, most recently as vice president and publisher. Prior to that, Sevier served in positions at Simon & Schuster, St. Martin’s Press, and HarperCollins Children’s Books.

Ingram Content Group has announced a series of promotions and new associates added to the company.

Caitlin Churchill has been appointed to the newly created position of Ae.rio business development manager, and will be responsible for creating and managing the business strategy for Aer.io as well as collaborating on product development and marketing. Ed Spade is now the senior manager of content acquisition, North America, for Lightning Source LLC, and Camille Watts has been named manager of content services for general sales for Lightning Source LLC in New York.

Janine Cook will be a new senior key account sales manager for Ingram Publisher Services in the Milton Keynes, U.K., office, while Dina Caplan has been promoted to manager of online marketing, content marketing for Ingram Book Group. Juan Anthony Walker Jr. has joined Ingram Book Group as a wellness center manager at the company’s headquarters in La Vergne, Tennessee.

We Need Diverse Books has announced the selections for its second annual Walter Dean Myers Award for Outstanding Children’s Literature – Young Adult Category, also known as “The Walter,” which honors the memory of the late author and champion of diversity in children’s literature.

The winner of the 2017 Walter Award is March: Book Three by Congressman John Lewis and Andrew Aydin, illustrated by Nate Powell (Top Shelf Productions). The award’s three honorees are Watched by Marina Budhos (Wendy Lamb Books), If I Was Your Girl by Meredith Russo (Flatiron Books), and The Sun Is Also a Star by Nicola Yoon (Delacorte Press).

The judging committee chose the winner and three honorees from 68 submitted titles, all published during the 2016 calendar year by diverse authors whose work featured a diverse main character or addressed diversity in a meaningful way.

The Walter Awards currently only include the existing young adult category, but in 2018, the contest will be expanded to include middle grade titles. WNDB also has plans to add a picture book category in the future.

The Mystery Writers of America has announced the nominees for the 2017 Edgar Allan Poe Awards, which honor the best in mystery fiction, nonfiction, and television published or produced in 2016.

The Edgar Awards will be presented to the winners at the Mystery Writers of America 71st Gala Banquet, April 27, 2017, at the Grand Hyatt Hotel in New York City.

See all the Edgar nominees here.