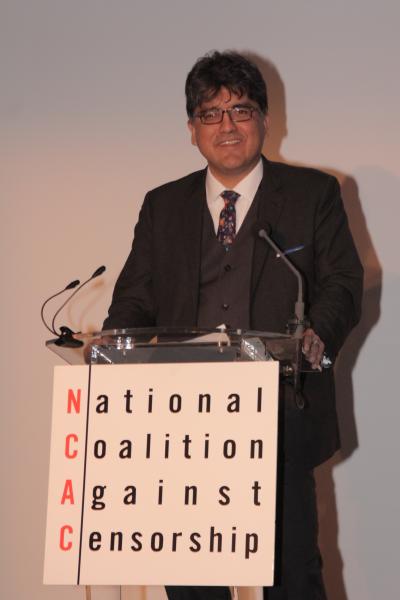 The National Coalition Against Censorship hosted its annual “Free Speech Matters: Celebration of Free Speech and Its Defenders” event on November 12 at Three-Sixty° in New York City.

More than 200 attendees joined in honoring Sherman Alexie, the National Book Award-winning author of the controversial young adult novel The Absolutely True Diary of a Part-Time Indian (Hachette), as a defender of free speech.

Newark Public Library Director Wilma Grey was also honored for curating a controversial art display on racial strife from artist Kara Walker, and Abrams President and CEO Michael Jacobs presented a special tribute to the late Peter Workman of Workman Publishing for his commitment to innovation in publishing and to NCAC’s mission.

Books & Books owner Mitchell Kaplan who was a co-founder of the Miami Book Fair International 30 years ago this month celebrated the fair’s anniversary by sharing his memories and reflections on the event in a video for South Florida Business Journal.

Kaplan also spoke with BTW last month about his involvement in the development and history of the fair, and how it has grown to become the annual cultural celebration that it is today.

According to the Washington Post, the United States Postal Service (USPS) is planning to open 82 pilot shops inside Staples office supply stores across the country as part of its Retail Partner Expansion Program. The first centers opened earlier in this month in San Francisco, Pittsburgh, Atlanta, San Diego, and Worcester, Massachusetts. Services at the centers include stamp sales, package delivery, and mailing and shipping options.

USPS recently announced a partnership with Amazon to offer Sunday deliveries to customers in much of the country beginning in 2014.

The Everything Store Named the Business Book of the Year

The Everything Store: Jeff Bezos and the Age of Amazon (Hachette Book Group) has won the 2013 Financial Times and Goldman Sachs Business Book of the Year Award. Author Brad Stone accepted the award on November 18 in London for his book, which won for its insight into modern business issues. The award was presented by co-chairs Lloyd Blankfein, chairman and CEO of Goldman Sachs, and Lionel Barber, editor of the Financial Times.

In an effort to broaden its reach, the University Press of New England is launching ForeEdge, its first trade imprint in two decades. The brand will encompass all of the press’s national trade titles on topics including history, politics, true crime, and music, beginning with the spring 2014 season.

“As our trade list has grown over the last several years, we found that the regionalizing nature of our press name kept these books from being distributed properly,” said UPNE Sales and Marketing Director David Corey. “We believe the launch of ForeEdge as a national trade imprint will break down some geographic barriers while also providing a contemporary vehicle for our robust trade books.”

To commemorate its 100th anniversary, the U.S. Department of Labor is asking the public to submit their recommendations  for books about work, workers, and workplaces to help it compile a definitive list of Books That Shaped Work in America.

The project is a partnership of the US Department of Labor and the Center for the Book in the Library of Congress.

NetGalley will begin hosting titles from Hachette U.K. in its digital books catalog. Reviewers, librarians, booksellers, bloggers, and the media will be able to request or be invited to read advance proofs of upcoming books.

“We’re delighted that Hachette U.K. will be using NetGalley to distribute secure, digital proofs to their own contacts and to our community,” said NetGalley President Susan Ruszala. “Digital proofs help publicists and marketers broaden the opportunities to create book buzz by reaching influencers of all types, faster and more efficiently.”

Houghton Mifflin Harcourt will begin using Ingram Content Group’s MyiLibrary® e-content platform to distribute e-books to libraries worldwide. Thousands of titles will be added to the platform, including both frontlist and backlist titles, and in a variety of genres.

“We are delighted to expand our e-book distribution through Ingram’s MyiLibrary platform,” said Laurie Brown, Houghton Mifflin Harcourt’s senior vice president of sales and marketing. “Through Ingram’s comprehensive platform and network of libraries, we have the tools to share our content with even more readers worldwide.”

HarperCollins Publishing has developed a partnership with Midwest Tape, LLC, which will distribute its frontlist and backlist audiobooks in physical format to public libraries in the United States and Canada and will provide on-demand production services.

On request, Midwest Tape will manufacture CD editions of HarperCollins titles that were previously only available in digital format.

Just three percent of books were published in digital formats in Argentina in 2007, but the number rose to 17.19 percent in 2012.

In “Argentina’s Bookstores Thrive Despite Digital Challenges,” Publishing Perspectives said that despite the rise in digital publishing, independent bookstores are continuing to prosper in the South American country. Argentinian bookstore owners noted a variety of characteristics that contribute to the success of their independent bookstores, including proper management, owner and employee personalities, store personality, care for customers, diversity of books and stores, quality of events, and service as a creative and cultural hub.

More than 50 million books were sold in Argentina in 2012, and the Cultural Information System of Argentina said that the country’s 2,256 bookstores account for 80 percent of those sales. Sales are divided evenly between independent stores and chain stores.

While stores are facing rising rent costs, salaries, and supply costs, they are protected by the country’s 2002 “Defense of the Bookstore Activity” act, which set up a fixed book price law. Prices can only be discounted 18 months after publication or if the book is going out of print.