Independent booksellers across the country have named Australian author Cath Crowley’s Words in Deep Blue (Knopf Books for Young Readers) a top pick for the Summer 2017 Kids’ Indie Next List. 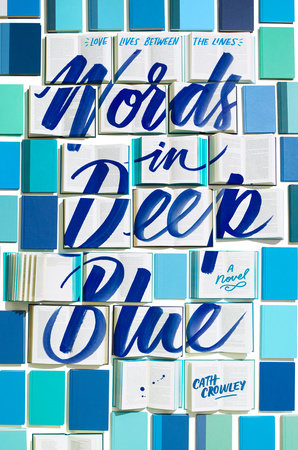 “Words in Deep Blue is one of those books that stick with you long after you’ve finished reading them. The center of the story is Howling Books in Gracetown, Australia, home of the Letter Library, a collection of books you can’t buy but in which you can write, circle a favorite passage, or leave a letter to a stranger, friend, or lover,” said Kate Reynolds, general book buyer for Colgate Bookstore in Hamilton, New York. “Like the precious books in the Letter Library, Words in Deep Blue is about life and death and love and friendship, about what was and is and can be. It’s about books and reading and the immediacy of teen life, and it ripped my heart out in the best way.”

Crowley has written several other books for young adults, including Graffiti Moon and A Little Wanting Song, both published in the U.S. by Knopf Books for Young Readers. She also works as a freelance writer and manuscript assessor and teaches student writing workshops. Words in Deep Blue, first published in Australia in 2016, has been listed for several literary awards in Crowley’s home country, including the 2017 Gold Inky Award and the Children’s Book Council of Australia’s 2017 Book of the Year for Older Readers.

Here, in an interview with Bookselling This Week, Crowley discusses how she came to write Words in Deep Blue, writing about serious topics for young adults, and why she loves indie bookstores.

Bookselling This Week: How did you come up with the idea for the book? 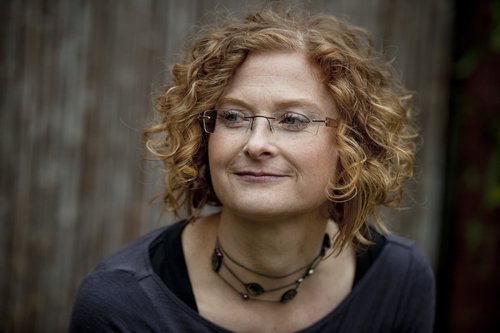 Cath Crowley: The idea for this book came from a lot of different places. A part of it arrived around my birthday last year, when I received an anonymous text telling me to check my letterbox. I checked it straight away — I was between book ideas — and found a sandwich bag full of cut-up Pablo Neruda poetry with instructions: I was to use the lines of poetry to make a new poem and post it within 24 hours. Other messages came over the following weeks. One sent me to the state library, where my sender placed hidden messages in books that were shelved in the permanent collection and I had 48 hours to find them. I located all but one. As it turned out, the sender of my secret messages was my best friend. (She’s always been great at keeping secrets.) Apparently, I’d lost my love of words. She’d decided to help me find it.

I did find that love again. I found it in libraries and secondhand bookstores, where I went after her messages stopped. I thought about that one message I didn’t find. Who found it? And what was their story? I thought about what’s left in books — lists, notes, dreams, thoughts. And I began a story about the things readers leave behind.

When my dad became sick, he mailed me copies of the books that he’d read so I could read them and we could talk. Those books arrived smelling of tobacco and old woolen jumpers. In some books he’d left the wrappers of sweets. They arrived covered with his thoughts, too, visible only to me. Those things were precious before he died, but even more so after.

BTW: Did you come up with the concept of Howling Books’ Letter Library on your own?

CC: The book took a long time to write because I couldn’t quite make that idea work. I wanted it to be about letters left in books but I didn’t want it to be about just two people’s letters. I wanted it to be slightly bigger than that, because the idea was that books are time travelers; in our family, we had lots of secondhand books and we would put old cards and things in them. I wanted it to be about what gets left behind. So I’d been thinking about it, but then it came to me that the problem could be solved by having a letter library in a bookstore where people can come and leave notes for other people. I do love that idea that books connect us.

BTW: You’ve written a number of other books for young adults, which have been published in Australia and in the U.S. What has your career as an author been like so far?

CC: I’m 45 now and I started writing when I was about 30. I’d been teaching English in secondary schools, and I decided to take a course in editing and writing and just take a bit of a break from teaching to see where it would go. Then Pan Macmillan in Australia picked up The Life and Times of Gracie Faltrain, one of my books, and I just started writing for young adults from there, really. So I feel like I’m still relatively new to it. After that, Knopf in the States took on Chasing Charlie Duskin, which was published there as A Little Wanting Song, and then I worked with Knopf on Graffiti Moon, which was been such a wonderful experience, and now Words in Deep Blue.

BTW: Words in Deep Blue contains some sophisticated intellectual ideas, like the transmigration of memory and the block theory of the universe. What are your feelings on including more complicated, serious, or “adult” concepts in books for young adults?

CC: It’s funny you say adult concepts, because it was actually a teenager who explained the “block theory” to me. So I think that oftentimes teenagers do have that grasp. I remember my nephew trying to explain the science to me; he’s smarter than I am. I think it’s important to write about what you love and what’s important to you and what means a lot to you. In my books, I’m often writing about how we lose ourselves in the landscape. In Graffiti Moon there are these teenagers who grow up in quite an industrial landscape but at nighttime it becomes quite beautiful because of the lights, and there is a graffiti artist who paints that landscape. So I love the idea of, how do we shape our world? In Words in Deep Blue it’s just that idea but in a different way.

My preoccupation is how we can make life more beautiful and more bearable while we’re here, so in this book it’s about words. And that’s it. There will be young people who won’t be interested, but I think there are young people who are really interested in that. When you’re a young child or a teenager, that’s when you’re just kind of insatiable and you want to go out and find out about all of those ideas.

BTW: The book came out in Australia last year and was published in the States on June 6. What are people telling you that they liked about the book?

CC: I’ve had some really lovely conversations with people about the book. Obviously, lots of book lovers and lots of booksellers love it because it taps into things they feel are really important, but I’ve also gotten lots of letters from people about grief and how it tapped into how they felt when they lost someone. So that’s been really interesting. I’ve also heard from lots of older readers, too, who have read the book and started thinking about what are of some of the really important things in life. So it’s been people on either end of the age spectrum: younger people who think books are really important, and older people who are thinking about how we come to terms with people dying and with loss.

BTW: What are some of your favorite indie bookstores where you live?

CC: My local before I moved was the Sun Bookshop in Yarraville in Victoria, Australia. It’s such a great bookshop, with an adult bookshop and then a separate one for young adults and children; it creates a real community, and that’s been so great. They’ve been hand-selling the book to people and they’ve actually created their own Letter Library in the bookshop where people can come in and circle things or leave letters.