Cellar Door Books in Riverside, California, has been using their remaining copies of the Independent Bookstore Day Literary Map of the United States to provide a summer reading challenge for customers. 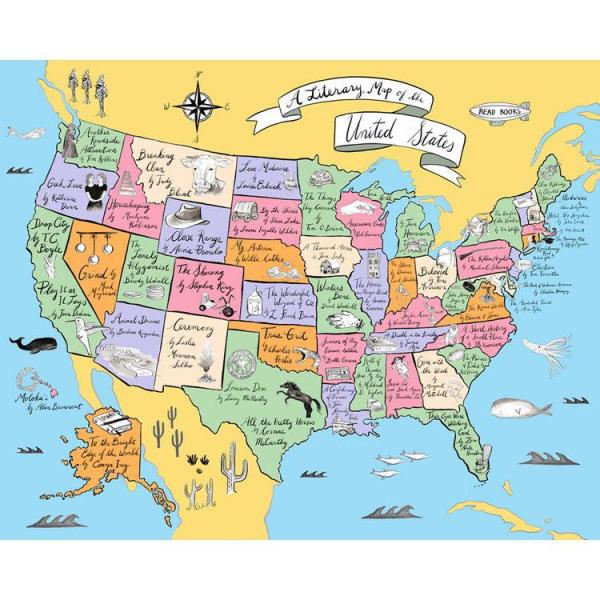 "A Literary Map of the United States"

The store’s “Literary Travelogue Challenge” asks customers to collectively read all 52 books listed on the literary map (Texas and California each have two books) before the end of the summer. If they do, in the late summer or early fall, the store will host a Literary Travelogue party with pizza and book discussions for all who fulfilled the challenge.

“When we got the Independent Bookstore Day Literary Map of the U.S., we just kept going back to it because it was such a cool idea,” said store owner Linda Sherman-Nurick. “And there were so many books that I hadn’t heard of! I love Montana. I visit fairly frequently and I had never heard of Breaking Clean by Judy Blunt.”

In essence, she said, the challenge proposes that people who are traveling to a state, or multiple states, within the U.S. this summer read the book for that state.

Sherman-Nurick, who said she hopes other booksellers will try a similar challenge in their own stores, has arranged all of the books in a display at the front of the store, along with copies of the literary map, which bookstores could order for this year’s Independent Bookstore Day celebration on April 29. Booksellers add a star to the map each time a customer buys one of the books, she said.

Titles on the literary map include Winter’s Bone by Daniel Woodrell (Missouri); A Short History of a Small Place by T.R. Pearson (North Carolina); Animal Dreams by Barbara Kingsolver (Arizona); and Olive Kittredge by Elizabeth Strout (Maine). So far, said Sherman-Nurick, 15 customers have signed on to read a book from one of the states, and the store has sold 25 books off of the display, although some of them have been doubles of the same title.

Cellar Door’s social media coordinator, Destenie Fafard, has also set up a Facebook event page where customers can post their comments on the books or post photos of themselves with their book in the matching state. The event description includes the link to Cellar Door’s website and the list of books. Customers can also post photos and comments on Tumblr or Twitter using the hashtag #cellardoorlittravel, or post photos to Instagram and tag the store using @cellardoorbookstore.

“We did initially write down all the names of people who were fulfilling the challenge and then it sort of fell by the wayside, but we’ve also been asking them to sign up on Facebook, Tumblr, Twitter, and Instagram,” Sherman-Nurick said.

“The two largest platforms we use to spread the word are our monthly newsletter and Facebook; I think a majority of our customer base primarily uses Facebook, and we’ve had the most response there,” said Fafard. “Other platforms, like Instagram, Twitter, and Tumblr, haven’t seen much response, but I think it’s important to utilize them all for our younger customers. Even if they don’t directly engage with a post by commenting or retweeting, they do see it if they follow our accounts.”

Sherman-Nurick added that she hopes the Independent Bookstore Day team will create and sell the literary maps next year as well. Although the store didn’t sell as many maps as she thought they would on the day of the event, said Sherman-Nurick, the extra literary maps have become a great resource and inspiration since then.