By far, the youngest speaker at this year’s ABC Children’s Institute was 12-year-old Marley Dias, founder of the #1000BlackGirlBooks campaign, which collects and distributes books featuring characters of diverse backgrounds to children. 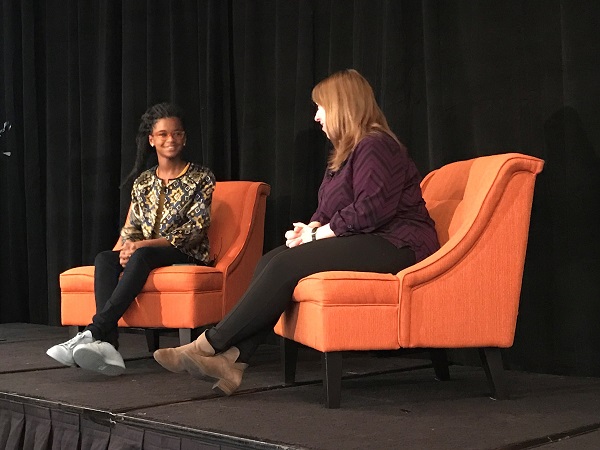 On Friday morning, April 7, Dias, who has collected more than 9,000 books so far, appeared in conversation with Suzanna Hermans, co-owner of Oblong Books & Music in Rhinebeck and Millerton, New York, during the featured talk “Inspiring Readers to Enact Change.” Over the course of an hour, Diaz, whose first book, Marley Dias Gets It Done and So Can You!, will be published by Scholastic on January 30, 2018, talked about her journey from New Jersey tween to viral activist sensation.

The young black activist told booksellers that the #1000BlackGirlBooks campaign was born from her desire to see more titles with diverse characters on her school’s reading list. In 2015, as a sixth grader at Saint Cloud Elementary School in West Orange, New Jersey, Dias was tired of seeing so many books about “white boys and their dogs,” and not enough books involving characters of other races, genders, and identities. Although she enjoys such classic books as Shiloh and Where the Red Fern Grows, Dias said that there are equally good books about black girls and other non-white, non-male protagonists that kids should be reading, such as Roll of Thunder Hear My Cry by Mildred D. Taylor, One Crazy Summer by Rita Williams-Garcia, and President of the Whole Fifth Grade by Sherri Winston.

“I wanted to make sure that kids who were only getting books inside of school were having the experience of diversity in school and at home,” Dias said. “Reading has been something my school has done a good job promoting, but I just always found it to be a problem that they weren’t promoting the right books for everyone.”

In her new book on the #1000BlackGirlBooks campaign, which also contains tips for kids interested in activism, Dias writes: “If only there had been one book at school, just one, about a black girl and her dog. A brainiac black girl astronaut with her trailblazing space poodle exploring the rings of Saturn. A fierce black girl fashion designer with her frisky Rottweiler on a rhinestone leash owning the streets of the city. An intrepid black girl forensic archaeologist with her inquisitive collie uncovering the fossilized remains of some prehistoric species.”

Dias’ efforts to diversify the characters on her bookshelf and in her school’s curriculum by collecting #1000BlackGirlBooks has been celebrated by thousands of readers, and by booksellers across the country who are supporting the campaign in their stores and on social media.

With support from her mother, Janice Johnson Dias, co-founder of GrassROOTS, a social action group that promotes girls’ wellness, Dias’ campaign on Twitter, Facebook, and Instagram has already brought in thousands of books, which have been donated to local libraries. reading clubs, and schools in New Jersey, Connecticut, Massachusetts, California, Haiti, and Jamaica. In the future, Dias would also like to expand the reach of the campaign to other foreign countries. “I want to make sure we have these windows and these mirrors anywhere we could possibly put them,” she said.

On her journey to diversify children’s literature, Dias’ efforts have been covered by numerous major media outlets, including the New York Times and NPR. Dias has also had the opportunity to meet some of her heroes, including Brown Girl Dreaming author Jacqueline Woodson and former First Lady Michelle Obama. Most recently, Dias participated in Read Across America, the National Education Association’s literacy program, and gave a speech at The Dr. Joseph S. Renzulli Gifted and Talented Academy in New London, Connecticut.

In her conversation with Hermans, Dias encouraged booksellers to make their stores a go-to resource for young people and their varied passions, because diverse voices in literature and books about diverse experiences matter, she said. Dias also recommended that booksellers continue and increase their collaborations with schools on author appearances and other events.

When it comes to celebrating Black History Month at bookstores, Dias suggested that booksellers focus not just on promoting books about the Civil Rights Movement and slavery, but also books that cover the full experience of black people, including the Harlem Renaissance of the 1920s, the discoveries and achievements of black scientists and inventors, and the many topics related to the modern black experience. “Black girl stories are not just for black girls; they are for everyone. Our stories are universal,” she said.

In a lively Q&A following the conversation with Hermans, Dias discussed some of her favorite books, her appreciation for social media as a tool for activism, and her desire to inspire and motivate other young people.

A key requirement for anyone who wants to be a successful activist, Dias said, is to be invested and engaged in one’s cause, no matter what it may be, and social media is an ideal medium for those efforts because it comes with the built-in acceptance of a community. Despite the inevitability of encountering hateful people online, Dias said that the power of the Internet is invaluable when it comes to connecting with others and the ability to create or join a whole new community.

“I try to reinforce to kids that you have the power in your phones and in the things you like to do, and through social media,” said Dias. “You can get a hashtag or you can get a Facebook group if you like Facebook. You can put something on your Snapchat story and someone can see it, and then you can create this whole community and this whole space for what you want to do.”

Booksellers can visit the GrassROOTS Community Foundation website for a resource guide of #1000BlackGirlBooks titles with their designated reading levels. Dias also encouraged booksellers to reach out to her via Instagram (@iammarleydias) and Twitter (@iammarleydias).