Education in Depth: Five Indies on the Importance of Regular Store Inventories

Booksellers from five independent bookstores around the country recently told Bookselling This Week about how they conduct store-wide inventories, why it’s important to do so regularly, and how other indies can begin the process.

Conducting a thorough inventory is important at Maria’s Bookshop in Durango, 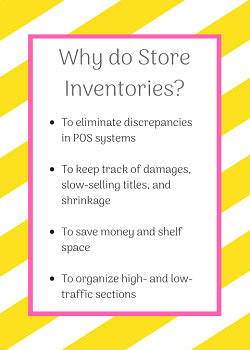 Colorado. The store does three different types of inventories: a daily inventory to check what was sold the day before; a category-specific inventory twice yearly for the whole store and three times per year for high-volume sections; and an annual inventory.

Maria’s Bookshop closes early for the annual inventory, typically at 4:00 p.m., to prepare. Its staff moves all of the books and stands off of the shelves, and in five teams of two, they each take a scanner and load laptops on mobile carts to begin the process of inventorying. The store even has a map for staff to reference to keep the process as streamlined and organized as possible. The inventory is typically completed late that night, and the next morning the store’s inventory manager runs discrepancy reports. From there, the store begins the process of re-shelving.

“We just want our POS to accurately reflect what’s on the shelves,” said co-owner Peter Schertz. “All those items are already in Booklog. What we do is zero out the quantities on hand for everything in the store and [then] we repopulate it...So if there are any discrepancies due to theft, or due to errors, it all theoretically gets cleaned up.

“It’s a really good exercise for our staff to see books that they never see otherwise, and to see what that process looks like and have faith in that process, so that they believe our inventory to be right when they look at it in Booklog,” said co-owner Andrea Avantaggio, adding that this process and the accuracy it ensures is part of the store’s culture. “It’s a great learning tool for our staff, and it’s a bonding experience.”

While Porter Square Books in Cambridge, Massachusetts, used to conduct inventories on a rolling basis, co-owner David Sandberg said that the store has now switched to an annual and biannual method. The store inventories all sections once per year and high-traffic sections, such as fiction, twice per year; the inventories take place during store hours at the end of weekend days and continue through the night.

Inventories are an important way for booksellers to know what they have on hand, said Sandberg. “How often does a customer come in and ask for a book, your inventory system says that you have it, and someone spends 20 minutes looking for it, but can’t find it? Sometimes for that customer you just order them a new copy, but other times they say never mind and you’re losing a sale,” he added.

Books can go missing for all types of reasons, whether it’s because they’ve been misplaced, stolen, or not properly processed, Sandberg noted. Not only can a full inventory save booksellers money, but it can also save space on their shelves as well.

“You might have three copies of a book when your inventory thinks you have two,” Sandberg said. “That third book is taking up space on the shelf when there’s no reason for it to be there. Obviously, that isn’t costing you money in the same way, but it is costing you the opportunity to have a different book on the shelf that you actually want there.”

As other booksellers mentioned, Sandberg suggested that owners and managers make it an event for their staff. “If you pay people a little extra money — because obviously it’s overtime, they’re there late at night — and bring in pizza, it can be fun. Everyone’s there, everyone’s doing it until late at night, and you have food. I would recommend doing that if you can.”

Cynthia Compton, owner of 4 Kids Books & Toys in Zionsville, Indiana, shared that her store does an annual store inventory in addition to sectional inventories each month.

The annual inventory takes about five days to complete and is done one section at a time during the store’s operating hours. They plan this inventory to take place during the last week of January or the week after local children go back to school to account for potential returns, said Compton.

For the smaller monthly inventories, 4 Kids Books & Toys is divided into 10 sections; each one of those sections is inventoried individually between January and October. The goal of this approach is to complete sectional inventories before the holiday rush. These miniature inventories also inform the annual inventory that takes place at the end of the holiday season.

Compton said that there are many different reasons the store approaches inventories in this way. Not only is it a way for the store to stay on top of damages, slow-selling books, and shrinkage, but it is also an opportunity for staff training.

“Having the staff physically inventory one section each month increases their awareness and knowledge of our merchandise,” Compton said. “That prepares them for 4th-quarter sales, when it’s too busy to be counting much.

“We have never used an outside firm,” she added. “We do pay staff for extra hours, and invite them to sign up for shifts at any time to do [monthly] inventories. For some of our employees who are moms and students, the opportunity to come in at night or on a Sunday morning when we’re closed is really helpful.”

Overall, Compton recommends that other booksellers try the year-round, sectional approach. “By looking at each section throughout the year, I am able to talk to vendors about items that are moving slower than expected, reorder more effectively, and generally look at product damage and loss. Also, it keeps our POS system more accurate, which frees up both dollars and inventory records — you can’t sell it if you don’t have it,” she said.

Tattered Cover in Denver, Colorado, recently switched from doing a full annual inventory to a method called “cycle counts,” which occur on a rolling basis.

The store decided to switch to this method because its POS system, NetSuite, was better suited to cycle counts instead of a full annual inventory, Vlahos said.

“We’ve also found that it really helps us keep sections straighter. When it’s just one inventory, you’re going in and trying to get everything done,” he said. “When we’re counting political science [alone], we’re taking the time to organize it and pull returns. We do a whole lot of things to give the section a little more love than it might have otherwise received.”

“It’s hugely important to Tattered Cover to know and understand what our inventory is, and we’re always be counting it in some fashion or another,” he added. “I don’t think we could run or operate our business if we didn’t have a good sense of our inventory.”

At Vroman’s Bookstore — which has three locations in Pasadena, California — President/CEO Allison Hill shared that store inventories are conducted on an annual basis.

Each location closes early on the day its inventory is scheduled, which typically takes place during the last few days of its fiscal year; one store is inventoried per day. While the branch stores usually take about six hours to inventory, Hill said that the main location can take as long as 10. Vroman’s hires RGIS (Retail Grocery Inventory Specialist) for the initial inventory, and then the staff audits the company’s work.

Conducting inventories is an opportunity not only to ensure that a store’s physical inventory matches what is listed on its financials, said Hill, but to also clean up stock, check for returns that were missed, ensure on-hands are correct, discover potential shrinkage issues, and touch everything in the store in a way that brings attention to details that can be missed during the normal day-to-day blur.

“It’s a daunting task, but very worth it. Planning and auditing are key,” Hill added. “And make it fun! Our CFO always creates a theme for inventory and there’s décor and costumes and tons of food.”