Linking up with the local farmers’ market is one way Main Street businesses, such as bookstores, can create symbiotic relationships that benefit their own bottom lines while growing social ties within their communities.

According to Stacy Mitchell, co-director of the Institute for Local Self-Reliance, studies have shown that people shopping at farmers’ markets and traditional Main Street business districts are more likely to run into neighbors and engage in a greater number of conversations than those navigating the aisles of a big-box store. 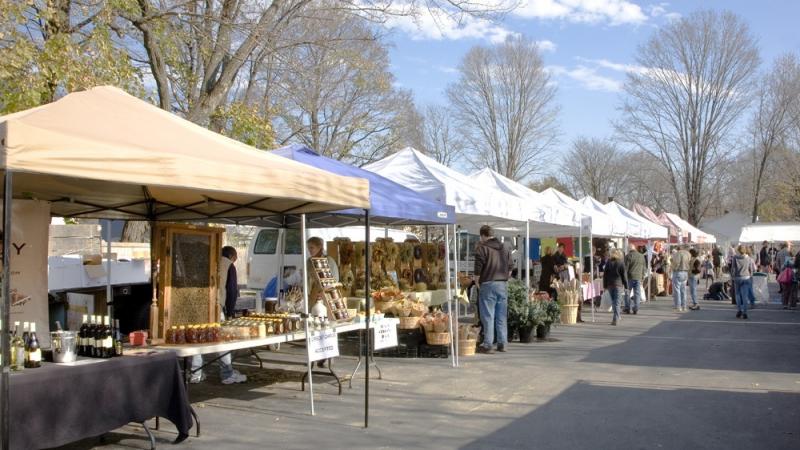 While farmers’ markets have the ability to unite small businesses in mutually profitable partnerships via formal selling agreements, a market’s mere proximity to a store can oftentimes increase foot traffic and sales significantly.

The Twig Book Shop in San Antonio, Texas, frequently plans book signings to coordinate with the local farmers’ market, which sets up right outside its doors. This arrangement has proven especially useful for store events that incorporate presentations with displays, associated products and giveaways, and demonstrations of any kind.

“The bookstore has never had to pay anything to the farmers’ market,” said Twig manager Claudia Maceo. “We keep the events just outside our door, or in the case of a chef/author, they pay a fee [for a food prep license].”

Popular authors who have exhibited at the market include cookbook writers who stage cooking demonstrations; author Bruce Judisch, who displayed an actual piece of the Berlin Wall to promote his self-published novel Katia; and Tina Mollie Fischer, author of the self-published Pig’s Big Adventure, who drew crowds by bringing along a real live pig in a crate.

The Twig hosts two types of signings, according to Maceo: Sit & Signs on Saturday mornings during the market and readings at the store during weekday evenings and weekend afternoons. For events held in conjunction with the market, The Twig provides the event space, book processing and sales (including tax), and marketing support, but using the venue itself incurs no extra costs for the bookstore.

The Twig also coordinates with local performer Miss Anastasia to host a popular children’s story hour, often featuring costumed characters, in the nearby pocket park while the market is in progress.

Oblong Books & Music in Millerton and Rhinebeck, New York, has a longstanding relationship with the Rhinebeck Farmers’ Market, where it regularly hosts cookbook authors and children’s authors and illustrators. Getting a table at the market is free, said Helen Seslowsky, Oblong Books’ event coordinator, but the store donates a portion of its sales back to the organizers. Oblong is also one of the market’s annual sponsors.

“The chefs and cookbook authors frequently will include demonstrations using locally sourced produce from the market,” said Seslowsky. “We have a designated tented table, and the authors stay from 11:00 a.m. to 1:00 p.m. to meet readers and sign books. Visitors, booksellers, and the authors love the relaxed and bustling atmosphere and we sell a lot of books.”

Oblong usually has a designated bookseller on staff to handle offsite events, including the market, Seslowsky said, but all store staff are capable of managing Oblong’s presence at the market and have done so in the past.

Seslowsky said other store owners who are thinking of exhibiting at their local farmers’ market should “familiarize [themselves] with the set-up and determine if the customer demographic is right for book sales in your area.” 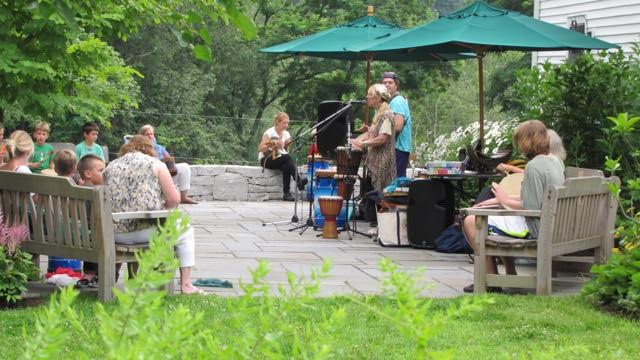 Booksellers should also start a dialogue with the market manager to determine what sells well, how many adults with children can generally be expected to attend, and whether there are seasonal changes in attendance, she said. This information will help stores determine what titles to feature. For Oblong, children’s book author/illustrators, cookbooks, and food/agriculture or local craft-related books have tended to work best. Seslowsky said she decides how much inventory to bring to the market based on past sales figures, and booksellers use the Square handheld POS system to process orders.

Katharine Nevins, who owns MainStreet BookEnds of Warner in Warner, New Hampshire, is on the board of the local community-building and arts nonprofit MainStreet Warner, Inc., which stages the local farmers’ market. Each week, Nevins said she sees an average of 30 to 40 people during the market, which takes place every Tuesday afternoon in the summer in the community park that adjoins the bookstore.

The local farmers’ market includes storytelling for kids, sometimes music or drumming, cooking demonstrations, and, this year, tai chi demonstrations, said Nevins. If the market is not featuring live music on a given day, Nevins will go out and read stories to the kids who come by.

As the market naturally draws people into the bookstore, Nevins does not typically set up books outside; however, one exception has been Before We Eat: From Farm to Table by Pat Brisson, Mary Azarian (Illus.) (Tillbury House Publishers), which tells the story of the people who plant the grain, catch the fish, tend the animals, and fill the crates that bring food from their farms to our tables. The bookstore sometimes cross-promotes with one of the local produce vendors to sell Before We Eat or a special children’s book about gardening.

MainStreet BookEnds has also exhibited at larger farmers’ markets, putting out two to three tables with books on gardening, sustainable agriculture, and the food movement.

Even though it does not have a direct partnership with the local farmers’ market, J. Michaels Books in Eugene, Oregon, nevertheless enjoys a tertiary sales benefit on the weekends by virtue of its proximity. Eugene’s farmers’ market is also across the street from the Saturday Market, a craft and food booth fair that takes place every Saturday from April until Thanksgiving.

Some stores, however, may face barriers to entry at their local markets. Becky Dayton, who owns The Vermont Book Shop in Middlebury, Vermont, said the Middlebury Farmers’ Market restricts participation to vendors who produce their own merchandise.

For example, she said, a craftsman who builds jewelry cabinets can become a vendor, as can a farmer selling eggs and kale, but the Vermont Book Shop cannot, since it does not directly manufacture what it sells.

“It’s too bad, because I think we could have a great display of titles of interest to the market clientele, as well as be an alternative pick-up location for special orders,” Dayton said. “We could also hold cookbook author demos and story times. I’m going to keep working on them.” 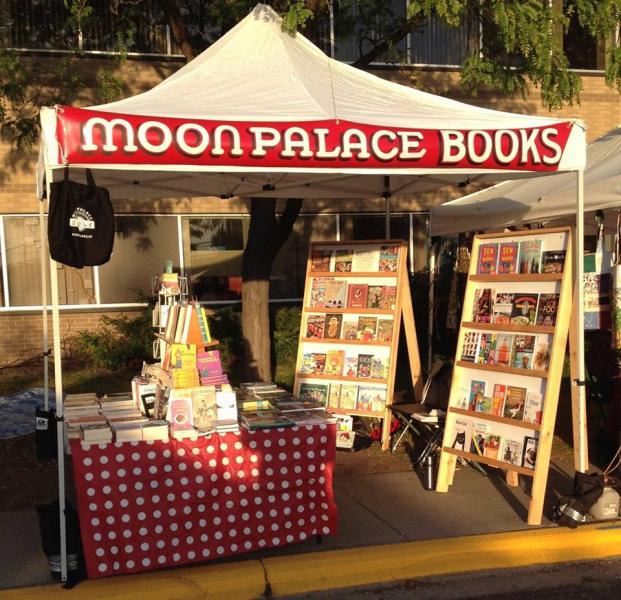 Angela Schwesnedl, who co-owns Moon Palace Books in Minneapolis, Minnesota, with her husband, Jamie, said she often sees new customers at the store in the days after the market takes place.

“It’s been really great for us. We also give out store coupons at the market so people are encouraged to visit the store afterward. We’ve definitely found that people will come into the store all week long looking for stuff they’d seen at the farmers’ market,” said Schwesnedl.

Moon Palace brings between 200 and 250 titles for children and adults to the market each week. In addition to cash transactions and those using Square, Schwesnedl said she has even traded books for vegetables with other vendors.

A Bit of Earth in Flint, Michigan, is one of 50 unique vendors situated within the building that houses the year-round Flint Farmers’ Market. Along with the typical vendors selling produce, meats, cheeses, breads, and baked goods, the Flint Farmers’ Market, which touts itself as “a year-round feature of Flint’s landscape,” also houses a wine shop, an art gallery, a café, stalls with unique gifts, and two resident chefs.

A Bit of Earth, which sells a varied selection of new and used books for children and teens, local crafts, natural items like rocks and gems, and greeting cards, was founded by bookseller Hope Lafuente. After 18 years in the book industry, Lafuente was “tired of corporate guidelines and cookie-cutter displays that had nothing to do with what events were happening around town.”

“Being at the market as a book shop location is such a joy: where else can you grocery shop, listen to music, join an exercise class, and buy a book?” said Lafuente. “Being in a place that is also resurrecting a city and flooding it with hope is a perfect match to what my mission is in life and as a business owner.”

Harvey Finkel, owner of Clinton, New Jersey’s Clinton Book Shop, had some advice for booksellers in towns that don’t have a farmers’ market: Create your own. Six years ago, Finkel, a founding member of the county’s Local First movement, spearheaded a group of community members to establish the Clinton Farmers’ Market, which now hosts 18 vendors and draws 300 visitors per week.

To lay the groundwork for a farmers’ market, “get to know the town government and get to know the people, even if they don’t come into your store,” said Finkel, who also founded the town’s first Harvest Festival at the market last October. “And get your customers involved. Mention it to them; just get the word out there, whether you do it through the store, through email, newsletters, or social media.”