Larry Siems is a friend of mine.

He was PEN American Center’s go-to guy on free speech issues for many years. We have lunch. He comes to the family Christmas party.

So naturally I bought his book, The Torture Report: What the Documents Say About America’s Post-9/11 Torture Program, when it was published by OR Books in 2011. The ACLU had hired Larry to create a website that showcased the huge cache of documents it forced the government to release under the Freedom of Information Act. The book incorporated many of the key documents.

I bought The Torture Report at an event in New York where well-known actors read movingly from the documents. On the subway ride home, I read the introduction and promised myself I would return to the book soon. 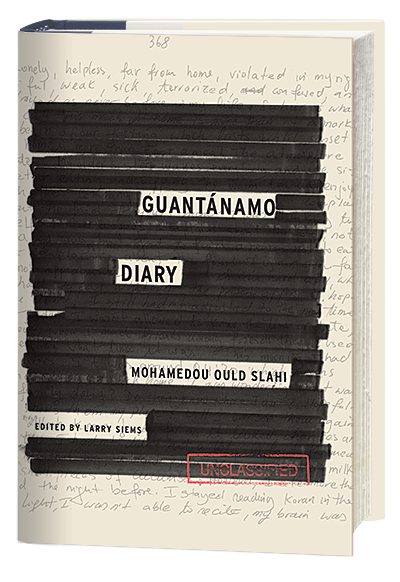 I was like a lot of Americans who were appalled by what they knew about the American torture program. But the torture had ended by 2005. A new president was elected in 2008. Barack Obama condemned torture and promised to close the prison at Guantanamo Bay where much of the torture had occurred. What else was there to say?

The answer came in January with the publication of Guantanamo Diary by Mohamedou Ould Slahi (Little, Brown). Slahi is the first inmate of Guantanamo to tell the full story of his imprisonment and torture by the American government. Little, Brown hired Larry to edit the manuscript.

Arriving just a month after the Senate Intelligence Committee released a scathing review of the CIA’s “extraordinary rendition” program, Guantanamo Diary does what no document, article, or government report can do: It gives Slahi the opportunity to tell his own story. It gives us the chance to listen to someone who was on the receiving end of the program that was supposed to protect us and a chance to consider again whether torture is ever justified.

Now 44, Slahi remains a prisoner at Guantanamo Bay where he has been held since August 2002. For many years, the government considered him one of its most important detainees. He was suspected of being a terrorist because he had interrupted his studies in Germany to fight against the Russians in Afghanistan in the early 1990s. He had sworn an oath of allegiance to al-Qaeda at that time. The government also considered it suspicious that after the war he returned to Germany and completed a degree in electrical engineering; that he spoke several languages and was a distant cousin of one of Osama bin Laden’s theological advisers.

Slahi was suspected of trying to bomb the Los Angeles Olympics and later the CN Tower in Toronto. It was also believed that he had helped men who were involved in the 9/11 attacks.

Slahi denied all of the charges. He said he had quit al-Qaeda in 1992 and had no further contact with its members or other terrorists. When he was finally given a lawyer and was able to file a petition for habeas corpus, a federal judge agreed that there was no credible evidence against him.

By that time, Slahi had suffered months of torture that had been personally approved by Defense Secretary Donald Rumsfeld. In the summer and fall of 2005, at the suggestion of his lawyer, Slahi wrote a 455-page, 122,000-word diary covering the period from July 2002 through 2005, which included a detailed description of his torture. When the government was finally forced to release the diary, the manuscript included more than 2,500 deletions.

But the censorship cannot obscure the fact that Guantanamo Diary is an extraordinary book. Slahi did not speak English when he arrived at Guantanamo, but he writes it well now. I felt his confusion, anger, terror, and despair as he is arrested, imprisoned without charges or the right of judicial review, and, finally, tortured. The narrative presses forward with an intensity that is sometimes gut-wrenching. The violence is shocking. But the story is so engrossing that I had to finish it.

The book’s literary qualities are not even the most remarkable thing. Guantanamo Diary is the story of a man who was able to maintain his humanity under terrible conditions. Slahi was often in pain and always in fear of more, but he was rarely despairing and never degraded. For years, he complained to his jailers that it was wrong to lock him up without due process; he told the torturers that it was wrong to torture. He finally confessed to put an end to the pain. He admitted acts he didn’t commit and implicated people he didn’t know.

But Slahi was not broken. A devout Muslim, he never lost faith in God or his optimistic view of life. He kept his keen sense of humor. These qualities attracted his jailers and made some of them his friends. One of the most telling things about Slahi is that he was always ready to see the good in the Americans he met and remains ready to forgive even the men and women who tortured him. But first they must acknowledge their wrongdoing. There must be justice.

The first step should be to release Slahi, who is still held at Guantanamo because the Obama administration appealed the 2010 decision ordering his release. The ACLU has launched a petition to win his freedom. A special bookmark can be ordered by e-mailing zmartohardjono@aclu.org.

Booksellers can play an important role in promoting this debate by doing what you do best. You can sell your customers a great book about torture.