On Friday, April 20, PBS and The Great American Read revealed the list of America’s 100 best-loved novels, kicking off the eight-part television and online series designed to spark a national conversation about reading. ABA CEO Oren Teicher represented indie booksellers at the event and announced five of the titles. 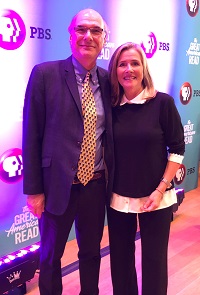 With the premiere of the launch episode on May 22, The Great American Read will invite viewers across the nation to vote to choose America’s best-loved book. Voting will close on October 18, and the grand finale will air October 23.

To help booksellers promote The Great American Read, PBS has provided a folder of downloadable assets, which includes the list of 100 featured titles as well as logos, shelf-talkers, bookmarks, posters, and more.

Booksellers should also watch for the arrival of the ABA May Red Box, which will include buttons, stickers, bookmarks, and an easel-back.

Learn more about The Great American Read, and watch Bookselling This Week for updates.