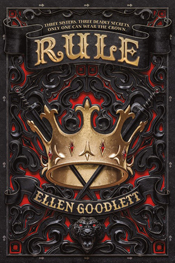 Ellen Goodlett is the author of Rule (Little, Brown Books for Young Readers), a Summer/Fall 2018 Indies Introduce selection and a Fall 2018 Kids’ Indie Next List pick.

Nancy Baenen of Arcadia Books in Spring Green, Wisconsin, served on the bookseller panel that selected Goodlett’s debut for the Indies Introduce program. In Rule, “three young women, each with her own deadly secret, discover that one of them will ascend to the throne of their dying father. Each soon discovers that her secret will be used against her and together they urgently work to discover their blackmailer before they can be executed as traitors to the kingdom. Treachery and black magic intermix with sisterly loyalty and ill-fated romance. Your heart will race as quickly as your fingers turning the pages of this smart and captivating debut novel,” Baenen said.

Goodlett, a graduate of Bryn Mawr College, has lived in Pittsburgh and New York; more recently, she traveled with a large group and lived in different parts of the world for a month at a time.

Here, Baenen and Goodlett discuss what makes Rule’s characters unique as well as how the author’s travels have impacted her writing.

Nancy Baenen: In Rule, the three sisters in competition for the throne of their dying father share some general similarities, but each is very different. Who was the most difficult for you to write?

Ellen Goodlett: Akeylah’s voice was the most difficult to pin down. Zofi’s came through loud and clear right from the beginning, just like her, and Ren is pretty in-your-face, too. Akeylah is subtler. She’s just as strong as her sisters, albeit in different ways, but she’s also introverted and at times can be unsure of herself, which made it tricky to nail her voice at times.

NB: Do you identify with one sister over the other two?

EG: I would say that Zofi is the sister I most aspire to be like — strong, assertive, comfortable with telling you what she wants and then taking it. Not to mention she’s loyal and protective of her friends.

Ren is the sister I worry I am — opinionated and headstrong, even when she’s wrong, and quick to jump to conclusions based on little evidence. (I really do love her, though, I swear.)

But Akeylah is probably actually the most similar to me — terrified of large public functions, constantly feeling awkward and out-of-place. That may be why her voice was so tricky to pin down, since it’s so close to my own!

NB: Which of the sisters’ secrets would you find it hardest to live with?

EG: Oh, gosh. Probably Zofi’s, even though (without revealing too much) her secret causes her the least amount of guilt. I don’t blame her for what she did, but in real life, I don’t know that I’d have been able to do that, or to live with the memories of the act itself.

NB: You are a world traveler. Where in Rule do we see your experiences as an explorer?

EG: Some places I’ve visited crop up in the book. Huacachina, an oasis town in Peru, helped me describe Zofi’s opening scene (although I wrote the original draft before I’d been). Recoleta Cemetery in Buenos Aires was the basis for the Necropolis. The Travelers’ nomadic lifestyle and their band-as-family views come from the group of 78 people I traveled around the world with during the year I wrote this book.

Other times, influences weren’t intentional, but may have crept into my subconscious. For example, when I described the skysquats, a friend pointed out how similar they were to the Comuna 13 neighborhood of Medellín, Colombia, where we were living at the time. That’s the great thing about travel — it’s a constant overload on your senses, so even when you don’t notice it, you’re still being inspired by the cultures and communities you encounter.

NB: And the one question everyone who’s read Rule demands be answered: When will you finish the sequel?

EG: Funny you should ask — I just turned in the final draft this week! So, while I do apologize for that cliffhanger, hopefully the wait shouldn’t be too long before all of your questions are answered.

Find out more about the author at ellengoodlett.com.