Ulrich Sandmeyer, co-founder of Sandmeyer’s Bookstore in Chicago, died on Friday, November 16. Below is the announcement that the store shared on Facebook and posted in the shop. 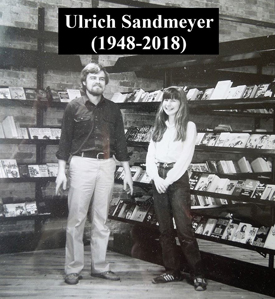 Ulrich and Ellen Sandmeyer founded Sandmeyer’s Bookstore in May 1982. The bookstore has served as an anchor for Printers Row and the South Loop for the past 36 years, partnering with local schools, libraries, and nonprofits to help transform a neighborhood down on its luck into a thriving hub of city life. Sandmeyer’s has been a proud supporter of the Printers Row Book Fair (now Lit Fest) since its start in 1985, bringing local and national authors together with tens of thousands of Chicago readers.

Ulrich was born on October 23, 1948, in Bielefeld, Germany, but fell in love with America as a high school exchange student. After his required service in the German Air Force, Ulrich enrolled at Miami University of Ohio, where he met his future wife, Ellen. They married in 1974 and promptly left Ohio for Chicago to pursue their dreams of owning a bookstore. Eight years, two children, and several cats later, that dream became a reality. A third child joined the family business a year later.

Over three decades, Ulrich saw his vision for a bookstore serving a vibrant, diverse neighborhood realized. Children who grew up reading books from Sandmeyer’s are now bringing their own children and grandchildren to discover the magic of books anew. Ulrich’s legacy lives on the bookshelves of thousands of Chicagoans and visitors from all over the world, just as he dreamed.

Ulrich died peacefully at home on November 16, 2018, at the age of 70. He is survived by his wife, Ellen, sons Brent and Rolf, granddaughter Kaia, and brothers Klaus, Martin, and Christoph. He was preceded in death by his beloved daughter Christina Minna.

In lieu of flowers, the Sandmeyers suggest donations to the Chicago Public Library Foundation.