Memphis, Tennessee, has worked to keep a bookstore at the Laurelwood Shopping Center for over 30 years. First, it was Davis-Kidd Booksellers, owned by Joseph-Beth Booksellers; then it was The Booksellers at Laurelwood; and now it’s Novel, a store that opened in 2017 after the local community rallied to keep an indie bookstore in the space.

Each transition has welcomed a new name. Nicole Yasinky, Novel’s marketing manager and a longtime employee of the stores in that space, told Bookselling This Week that when the store was in the midst of reopening after Davis-Kidd closed its doors, a new name popped into her mind: “word.” The name was in all lowercase letters, with a period at the end. After a quick Google search, she discovered that an indie in Brooklyn, WORD Bookstores, already had that same name stylized in a different way, so she kept thinking.

“I settled on ‘novel.’ It didn’t go anywhere at the time, and The Booksellers at Laurelwood was born, and that was that,” she said. “But when we had this brand-new operation we were trying to get off the ground, we knew we needed a bit of rebranding.”

She decided to toss “novel.” — all lowercase, with a period at the end — out to the group of investors and owners she was working with, and the name stuck. 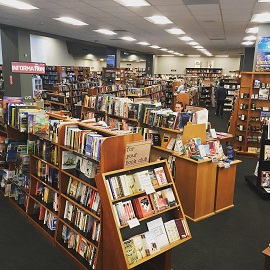 A look inside Novel.

“While we were about to open a store in the same space as two previous bookstores, with something of a legacy in Memphis that we longed to preserve and carry on, we also represented something different, something new and original,” Yasinky said. While the store goes by “novel.” in its day-to-day, “In the middle of a sentence, it’s Novel, just like any other proper noun,” she added.

Burton — whose role as general manager has expanded to include payroll processing, accounts payable, accounts receivable, and human resources — has been in the bookselling industry since the mid-’70s. He told Bookselling This Week that he started working at a mall bookstore in Memphis mainly because he loved books, but he stayed for as long as he has because he fell in love with the business.

In terms of its selection, Novel carries, among many other genres, everything from fiction, art, and drama to science, self-help, and humor. Its specialty, said Burton, is its booksellers, as each of the store’s 21 booksellers brings something special to the operation and to the larger book-buying community. Many of its special recurring events have attracted a large following, such as Story Time with Miss Marjorie. The monthly event, which is referred to by the staff as “Woodstock for toddlers,” can attract upwards of 75 families. Bookseller Scott Grave’s book talks are also very popular with customers.

In addition to its recurring events, Novel hosts a number of author events, which has been made possible largely by the relationships between event staff and publicists carried over from Novel’s predecessors. Yasinsky shared that some of the author event highlights so far have been Rick Bragg, Eric Jerome Dickey, John T. Edge, Beatriz Williams, Lisa Patton, Ace Atkins, Loren Long, and Hampton Sides.

The store also hosted Leslie Odom Jr. on his tour for Failing Up (Macmillan), which Yasinsky said was the opportunity of a lifetime. “One of the best parts is that we were able to work with local organizations and sponsors and our local school district to bring 100 students to the event for free! Standing in the wings watching students watching Leslie Odom Jr. speak and perform will surely go down as one of the most amazing moments of my career,” she said.

Yasinsky added that Novel also rents out its 1,500-square-foot events space to the public. Businesses have rented the space to train employees, area schools have rented it for luncheons and reunions, and political organizations have rented it for voter registration training and more. Yasinsky herself rented the space to hold a memorial for her parents, and in the coming months a couple is scheduled to get married in the store, with a reception to follow in the events space.

“We are also lucky enough to offer catering through the full-service (and delicious) restaurant in our store, Libro. We give right of refusal to them for all events, and they do a beautiful job catering,” Yasinsky said, adding that while the store isn’t making as much money off of rentals as they do author events, it’s another way to bring the community into its space.

Despite its 35-year connection to the bookselling industry, Novel has faced many of the challenges that startups do, Burton noted, but the local community in Memphis has enthusiastically supported the bookstore they’ve rallied for. “The community is solid and sales are brisk, but there’s always room for improvement,” he said.

As Novel moves forward, staff hope to have a special impact on the Memphis community that supported it. “As indie booksellers, we tend to pride ourselves on helping customers not only find what they are looking for, but also being a place of discovery,” Yasinsky said. “To find something novel every time you come in.”