Print: A Bookstore in Portland, Maine, is partnering with a local public radio station on a sweepstakes promotion that will award one lucky reader all 100 titles on The Great American Read’s (TGAR) list of most-loved American novels. 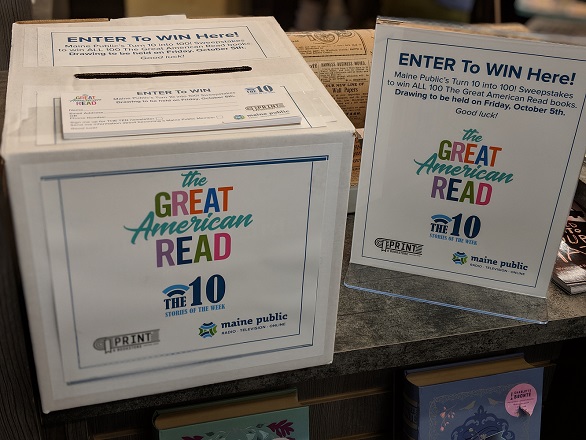 Readers can submit a form at Print: A Bookstore to enter a sweepstakes to win all 100 books on The Great American Read list.

Josh Christie, who co-owns the store with Emily Russo, told Bookselling This Week that Maine Public, the entity for public television and National Public Radio in the state, initially approached the store in May to partner on a book club project featuring the 100 books on the TGAR list, which are compiled from PBS’ nationwide survey of thousands of American readers.

“Maine Public has a daily public affairs show called Maine Calling, which both Emily and I have been guests on, and we have also worked with them on book sales at some of their events, so we had a relationship with the station already,” said Christie. “We had also underwritten on Maine Public when we first opened the store. We know the producer there, so a really good partnership has grown out of that.”

As part of its Book Club Adoption Project, the station “adopted” 25 different book clubs from around the state earlier this year and donated copies of a book of that club’s choice, with Print providing the books.

“[Maine Public] was purchasing the books from us and then distributing them to book clubs around the state,” said Christie; then over the summer, the station posted pictures on its website of each club along with the book they selected from the TGAR list and a summary of what club members thought about it.

But after that project was over, Christie said, both the store and the station wanted to continue working together for the duration of The Great American Read, so Maine Public approached Print about partnering on a TGAR sweepstakes.

Readers can enter the new “Turn 10 Into 100!” sweepstakes by signing up at Print, where there is a closed box set up along with forms for people to fill out and drop in. The box will be opened on October 5, when all entries are accounted for.

People can also enter by signing up for Maine Public’s THE TEN newsletter, a weekly rundown of 10 local and national stories that readers may have missed from various news outlets. Readers can also enter by voting in Maine Public’s Maine Great American Read Poll to choose the best book from the list of 100 and leaving a comment about the title, or by sending the station a note with the entrant’s name and contact information. A drawing for the winner of all 100 titles will be held Friday, October 5, with Print and Maine Public splitting the cost of the books.

While the partnership is primarily between the store and Maine Public, said Christie, the Maine Education Association, the Maine Library Association, and Coffee By Design in Portland have also provided some of the funding for the station’s literacy efforts around The Great American Read. These efforts have also included taking to the streets over the summer with a mobile Great American Read library and visiting popular reading spots to hand out copies of many of the top 100 TGAR books.

As The Great American Read has progressed, Christie told BTW, Print has, like many bookstores, also helped promote the program by creating a point of purchase display using the bookmarks, posters, and other materials they received through ABA.

“We had done that right from the start and have had some sort of display up throughout the summer. Now, the display is centered around this box where people can enter the sweepstakes,” said Christie. “The books on the list have been selling well. I think The Great American Read books are selling better than average; they’re not flying out the door like Fear by Bob Woodward, but it’s certainly helped sales a little bit.”

The fall season of The Great American Read kicked off on September 11 with an episode featuring different celebrities, authors, and readers discussing their favorite novels. As the eight-part television series on PBS continues through the fall, readers across the country will keep on voting for their favorite book on the list. The winner will be announced during the series finale on October 23.