Chelsea Clinton will appear in conversation with Lissa Muscatine, co-owner of Politics and Prose Bookstore in Washington, D.C., during a breakfast keynote at the American Booksellers Association’s sixth ABC Children’s Institute, to take place June 19–21 in New Orleans. 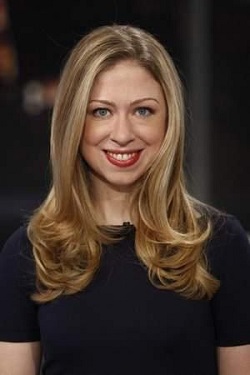 Chelsea Clinton, the daughter of former President Bill Clinton and 2016 presidential contender Hillary Clinton, is the author of the number-one New York Times bestselling picture book She Persisted: 13 American Women Who Changed the World, which received a starred review from Publishers Weekly, and She Persisted Around the World: 13 Women Who Changed History (both Philomel). She is also the author of the New York Times bestselling It’s Your World: Get Informed, Get Inspired & Get Going! (Puffin Books) and, with Devi Sridhar, Governing Global Health: Who Runs the World and Why? (Oxford University Press).

This fall, Clinton, who serves as the vice chair of the Clinton Foundation where her initiatives include helping to empower the next generation of leaders, will publish Start Now! You Can Make a Difference (Philomel), a middle-grade title geared toward young activists.

Muscatine is the owner of Politics and Prose with her husband, ABA Board member Bradley Graham. A former Washington Post reporter and White House speech writer during the Clinton administration, Muscatine is currently writing Hillaryland, her story about working with Hillary Clinton, to be published by Penguin Press.

The breakfast keynote will take place from 7:45 a.m. to 8:45 a.m. on Thursday, June 21, in the Grand Ballroom at the Sheraton New Orleans. Here, Clinton speaks with Bookselling This Week about her new book and her upcoming appearance at Children’s Institute.

Bookselling This Week: What has your experience been like talking to young girls who have read your new children’s book, She Persisted Around the World?

Chelsea Clinton: It’s been such a privilege reading She Persisted and now She Persisted Around the World with young readers across the country and hearing from readers who have read it at home, at school, in their library. One of my most favorite things is seeing how these stories are inspiring young girls — I love when girls tell me they’re going to be an activist like Wangari Maathai or a doctor like Mary Verhese. I also love when little boys tell me how much they admire Viola Desmond or J.K. Rowling. I’m thrilled that these stories that so inspire me have resonated in such a way.

BTW: Was witnessing your mom’s persistence during the 2016 campaign one of the reasons you decided to write the She Persisted books? What can young girls learn from Hillary Clinton’s experience?

CC: The book was inspired by Senator Elizabeth Warren’s persistence in sharing Coretta Scott King’s letter concerning Jeff Sessions from three decades ago. I think it’s always the right time to hear from Mrs. King and I think that it’s always the right time to expose someone one’s racist history. Sadly, Senate Majority Leader Mitch McConnell and his colleagues didn’t agree and they forcibly silenced Senator Warren. Thankfully, that was only for the senate floor and Senator Warren kept speaking out. As I was thinking about how to talk to my kids about Senator Warren’s persistence — mocked by Senator McConnell — and grace, I was reminded of the many other American women who have inspired me throughout my life and how much of our American history is shaped by women persisting. I shared this experience with my editor, who was similarly thinking about this moment, and we decided to try to write a picture book. I started writing and was so grateful that Alexandra Boiger, whose work I admire, was available to illustrate.

In the first book, it was important to me to include my mom, who has not surprisingly been so positively influential in my life with her persistence, courage, and commitment to helping people. I know I’m not the only person she has inspired, which is why I included her portrait in the opening gallery. I don’t think a day goes by when I don’t meet someone — often, but not always, little girls — who tell me they look up to my mom and that they’re going to be brave just like her. So I wanted to include her in a way that was reflective of the inspiration she’s been to me, and also that I know she’s been to so many others.

BTW: In today’s polarized and caustic political environment, how can booksellers educate and inspire children, and young girls especially, who are witnessing such injustice and incivility?

CC: I believe the stories we share with our children are critically important — to spark their imaginations, fuel their dreams, and often shape the way they see the world, including their place and others’ places in it, hopefully as equally valued and respected, while recognizing often not equally supported. Research shows that even today girls are more likely than boys to be told to be quiet and sit down; are less likely to be called on in school, especially in math and science; and are more frequently complimented on their appearance than the quality of their questions or the ingenuity or creativity of their ideas.

That’s why we, as parents, authors, teachers, and booksellers, need to make sure our children have access to positive stories of women who have persisted in different ways and in different moments in history, so girls, and boys, understand you should listen to what your heart is telling you and what your spirit is driving you forward to do and that every girl’s dream is just as valuable as anyone’s. We also need to model allyship in standing up to bullies and day-to-day kindness.

BTW: What books are you reading with your own children at the moment?

CC: With Charlotte, for almost two years we read The Paper Bag Princess by Robert Munsch every single night, which is about a young woman who takes control of her fate after a dragon burns down her castle and carries off her prince and realizes she can write her own story. Now it’s every few nights. Aidan currently loves anything with letters and numbers that he can recognize — a reigning favorite is Chicka, Chicka 123.

We read to our kids every night, and it’s such a blessing to be able to see them get excited about books — that’s what is important to me, ensuring that they are being read to in the way that is engaging, encourages a love of reading, and fosters their curiosity about the world. We want to figure out what kind of stories and characters they resonate with by exposing them to lots of good stories centered on girls, boys, trucks, mermaids, animals, and, really, anything.

BTW: Are you excited to be attending Children’s Institute? Do you know yet what you will talk about in your speech?

CC: Yes — I’m looking forward to speaking with Lissa Muscatine from Politics and Prose, sharing my experience of writing, the feedback I have received from young readers and their families, and discussing why stories featuring strong, inspiring women are so important to our girls, and boys.