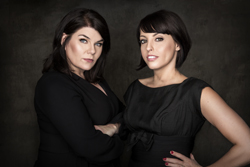 The “Mariachi & Murder” grand finale at the 2019 Winter Institute will feature Karen Kilgariff and Georgia Hardstark, the hosts of the hit true crime/comedy podcast My Favorite Murder, in conversation with Kelsy April of Savoy Bookshop & Café in Westerly, Rhode Island, as well as a lively performance from a local mariachi ensemble.

Each week on My Favorite Murder, which launched in 2016, Kilgariff and Hardstark discuss true crime cases with a sense of humor and insight that have earned them a cult-like fanbase and 19 million downloads a month.

Known for her biting wit and musical prowess, Kilgariff has been a staple in the comedy world for decades. As a performer, she has appeared on Mr. Show, The Book Group, and Conan. She was the head writer for the first five years of The Ellen DeGeneres Show, then transitioned to scripted writing for shows like Other Space, Portlandia, and Baskets. Her musical comedy album Live at the Bootleg was included in Vulture’s Top 9 of 2014 and in Stitcher’s Top 11 of 2014. 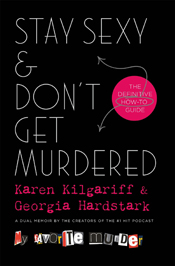 Hardstark has enjoyed a successful career as a food writer and Cooking Channel on-camera personality, which began with the invention of the farcical cocktail The McNuggetini. She went on to co-host a travel/adventure/party show called Tripping Out With Alie & Georgia and a regular gig on the Cooking Channel’s #1 show, Unique Sweets. She’s also a repeat guest narrator on Comedy Central’s hit show Drunk History.

Now, Kilgariff and Hardstark are the authors of the upcoming dual memoir/advice book Stay Sexy & Don’t Get Murdered: The Definitive How-To Guide, a Winter/Spring 2019 Indies Introduce debut selection to be published by Forge Books in May 2019.

Here, the two discuss the origins of the podcast, its rapid growth, and what they’re reading right now.

Bookselling This Week: How did you decide to start recording a podcast together?

Karen & Georgia: We were at the same Halloween party and people started talking about the TV series The Staircase. We both jumped into the conversation, took over, and kept talking long after everyone else left the area. At the time, we had our own podcasts, so we knew there was something recordable taking place.

BTW: As it’s somewhat of an unusual blend of genres — comedy and true crime — how do you explain to people what your podcast is about?

Karen & Georgia: We’ve told people it’s like a recorded version of that conversation you have around the kitchen table after your aunt says, “Did you hear what happened down the street?” We talk about famous crimes but we’re not journalists, so we have the freedom to editorialize and go off on tangents. It’s basically a casual conversation between two friends who are obsessed with discussing the worst parts of life and who use humor to cope.

BTW: Tell us about the ever-loyal community of fans called “murderinos.” How did that develop, and how have you cultivated it?

Karen & Georgia: The term “murderino” is from a Ned Flanders line in a Halloween episode of The Simpsons. A listener used it in a thread on our old Facebook page and everyone just ran with it. That’s pretty much how the whole community developed. The live shows helped unify everyone, but our listeners are very proactive and passionate, so we haven’t had to do much. It’s definitely a DIY crowd.

BTW: What have you learned from the experience of becoming, essentially, small business owners? How have you managed this rapidly growing enterprise?

Karen & Georgia: Podcasting is like the Wild West right now, so we’re managing along with everyone else in this business. Of course, we never expected this show to become what it’s become when we first recorded it in the living room of Georgia’s tiny Hollywood apartment with no air conditioning. Luckily, we both had enough producing and business experience to know we needed a very smart team of people around us to back us up.

BTW: What do you hope indie booksellers will take away from your talk at Winter Institute?

Karen & Georgia: A better understanding of themselves and their place in the world. Either that or just a slight hangover and a branded canvas tote with various pens and quirky bookmarks in it.

Georgia: I have spent many lonely evenings perusing my favorite indie bookstores like Skylight Books in L.A. and Aardvark in San Francisco. I’ve also befriended many bookstore cats.

Karen: Before the Internet, wandering around bookstores was how I used to find out about new authors. I learned to do it in my hometown bookstore, Copperfield’s in Petaluma. It’s a downtown fixture.

BTW: On the podcast, you frequently discuss what you’re currently reading, listening to, and watching. What books are you reading and loving right now?

Karen: I’ve been listening to Bruce Robinson’s They All Love Jack (Harper) and I absolutely love it. It’s a very detailed evisceration of the theories around the Jack the Ripper murders. The writing is absolutely poetic and hilarious.

Georgia: I’m about to finish Gone So Long by Andre Dubus, III (W.W. Norton), which I haven’t been able to put down, and I just got an advanced copy (brag) of Beautiful Revolutionary by Laura Elizabeth Woollett (Scribe US) that I’m excited to dive into. I’m also listening to a Tana French murder mystery because it makes driving in L.A. less hellish.

The “Mariachi & Murder Wi14 Grand Finale” will take place from 5:00 p.m. to 6:00 p.m. on Friday, January 25, in the Kiva Auditorium at the Albuquerque Convention Center. The closing reception, featuring signings with Kilgariff and Hardstark in addition to the Salute to New Mexico authors, will follow in the foyer.

Winter Institute is a professional development conference open to registered attendees only; it is not a public event.