Now that a newly elected class of Congresspeople await their swearing-in, booksellers across the country may want to think about creating a personal connection with those or other newly elected local and state officials, including governors, senators, mayors, and councilmembers. 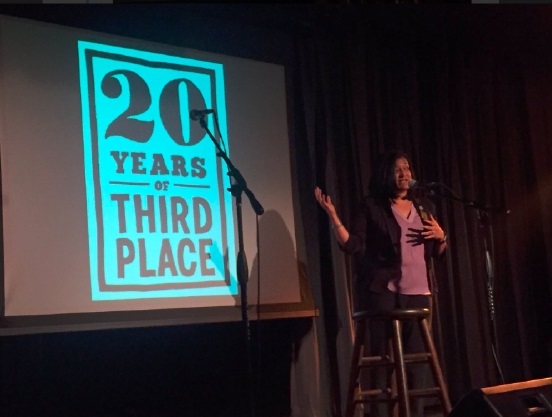 Third Place Books Managing Partner and ABA Board President Robert Sindelar’s success at this was in evidence recently when U.S. Congresswoman Pramila Jayapal, a Democrat representing Washington’s seventh district, accepted his invitation to speak at the store’s 20th anniversary celebration during the first weekend in November; two of Third Place’s locations fall within the House district she oversees.

Third Place’s relationship with Congresswoman Jayapal actually began about a year and a half ago, when Sindelar approached her at a fundraiser to thank her for her work on behalf of their community and to ask if she’d be willing to do something in conjunction with the store. Before her election in 2017, Sindelar had noticed the Congresswoman shopping as a customer at Third Place, which has locations in the Lake Forest Park and the Seward and Ravenna neighborhoods of Seattle; she had also done a reading at one of the store’s locations years ago for her book Pilgrimage: One Woman’s Return to a Changing India (Seal Press, 2000).

“[At the fundraiser] I went over to introduce myself and just kind of introduced that concept, saying, we’d love to do something with you around books,” said Sindelar. “It could be you coming in and talking about what you’re reading, or I could pair you up with an author we have visiting, or you could simply tell us what books you like, and we share that with our customers.”

“I think whenever you’re collaborating,” Sindelar added, “it’s often the relationship that is more important than whatever the actual event or activity will be, and you want to solidify that. So if you go in there without too much of a prescribed idea and just say, hey, I want to work with you on doing something in my store, that’s usually a good a starting point.”

After that conversation, Sindelar followed up with an e-mail to Jayapal’s office reiterating his ideas, and they agreed it would be easiest for Jayapal to offer a book recommendation. At the time, Jayapal was also conducting a series of mini town halls she called “Java With Jayapal,” so Third Place scheduled one of those at the store to take place around the same time they announced the collaboration. Jayapal, who is the first Indian American woman to be elected to the House of Representatives, then sent the store a list of books she read that she really liked, and Sindelar chose one off the list: Citizen by Claudia Rankine (Graywolf).

“Citizen was a big favorite of a lot of our staff at a lot of our stores, so I knew if I picked this one off her list, my staff would be like, ‘Oh, she’s cool.’ There would be this immediate connection, if they didn’t already have some awareness of who she was and what she was doing,” Sindelar told Bookselling This Week. “We made some in-store signage and a graphic we could put up on social media that basically said, this is what our Congresswoman (and yours) is currently reading, and we like this book, too. And then we created a physical display of the books with this graphic with an image of her in the store, and we also promoted it via social media.”

Sindelar’s conversations with the Congresswoman at the Java With Jayapal event led to her eventual appearance at the store’s anniversary party. “I think because we had that previous connection and it wasn’t just a random store in her district reaching out to her, when it came to our anniversary party and I said that we would love for her to be there and participate in some way, she was [on board],” he said.

Though he hadn’t realized it at the time, Jayapal’s appearance turned out to be the Saturday before the midterms, and the Congresswoman scored an amazing reception before an energized crowd. “[Having this book recommendation program with her] was a great anecdote to be able to introduce her at our party,” said Sindelar. On November 3, after the party, Jayapal tweeted: “@ThirdPlaceBooks thanks for 20 years of building community, investing in art and literature and allowing us to travel all over the world in the pages of all these books.”

“The program was great in establishing a connection with her and starting to have more of an ongoing relationship,” Sindelar told BTW. “At this point it feels as if the door is open, if there is another natural thing to participate in. She really tries to connect with her community, and our stores are community gathering places. And now she has a venue for future events as well.”

Dave Grogan, director of the American Booksellers for Free Expression and ABA’s Advocacy and Public Policy team, said booksellers can visit BookWeb.org to check out ABA’s Advocacy Action Kit, which contains local advocacy materials that are updated continuously, as well as the Local Policy Action Toolkit. Created by the Institute for Local Self-Reliance (ILSR) and Advocates for Independent Business (AIB), the Local Policy Toolkit offers independent business owners and retailers tools to advocate for local policies that support local economies.

Grogan noted that it is good for booksellers to connect with their lawmakers, especially new elected Congressional representatives, either by calling or e-mailing.

“You can also invite them to your store; it’s a great photo op for politicians to show they care; you can also invite other Main Street business to join. It’s a great way to start the conversation and make them aware of the issues that matter to you. An in-person meeting is more powerful if they are new especially,” said Grogan. “Regardless of party affiliation, it’s important to develop a relationship with your elected officials.”

Sindelar agreed that it is important for booksellers to reach out and start a dialogue with their elected representatives, especially in the current political climate where both sides are deeply concerned about the direction of the country. In this case, though, reaching out does not feel overtly political, he said.

“The thought I had [when approaching Jayapal] was very simple: You represent the district my store is in and my store is a natural gathering place for hundreds if not thousands of voters who you also represent. In a way, probably more so than a grocery store or a restaurant, bookstores are places people frequent for an exchange of ideas and to talk about issues. It’s a natural place for an elected official to come.”