Welcome to ABA, The Collective!

Indie bookstore The Collective in Peace Dale, Rhode Island, joined the American Booksellers Association last fall. The store is owned by Nicole Conley, Sarah Markey, Maggie Kain, and Tara Apperson, who collectively share all of the responsibilities of the business. 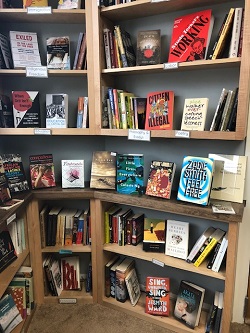 A look inside The Collective.

Conley, Markey, Kain, and Apperson, who first discussed opening their own bookstore at a book club meeting, decided to join the association in order to participate in ABA’s special Indies First/Small Business Saturday giveaway in November, which provided independent bookstores with a carton of special-edition copies of Jason Reynolds’ Ghost to donate to local schools and community organizations.

“Part of the mission of our store,” Conley said, “is to work with community partners like The Johnnycake Food Donation Center in order to enhance the quality of life for everyone in our community.”

The emphasis on community is also present in the store’s name, noted Conley. “We picked The Collective because the store is a group effort and it pulls together everything we each love,” she said.

The store, which celebrated its first year in business in January, is politically-minded. “Our store might be categorized as a radical bookstore,” Conley said, noting that they carry books on feminism, political theory, environmentalism, education, socialism, racial justice, and other topics, in addition to fiction, memoir, poetry, and children’s literature. “Our authors in these categories include many women, LGBT people, and people of color.”

The Collective also sells mugs, T-shirts, jewelry, and prints, as well as candles and hand salves, many of which are locally made.

“We are also hosting two book clubs in March,” Conley added. “One is a discussion of Eve L. Ewing’s Ghosts in the Schoolyard, and the other is an Octavia Butler book club, in which our first book will be Parable of the Sower.”

In addition to book clubs, The Collective hosts several author events each month, which can be book or community-focused. “This past weekend, we hosted the Kids Art Fest, where local children displayed their art and even sold some of it,” Conley said, adding that community members are welcome to reserve space at the store for their own meetings and events. “We also had a local pastor give a talk on mental health on Sunday. Coming up we have a talk with author Bill Fletcher Jr., who wrote The Man Who Fell From the Sky.”

Moving forward, the owners of The Collective are excited for the opportunities that being a member of the ABA can bring. “We are looking forward to learning more about selling books and how we can find our niche in the book industry,” Conley said.