The “Best Practices for Buying, Marketing, and Hand-selling Diverse Books” panel at Winter Institute 13 in Memphis featured booksellers who have successfully expanded sections to include diverse books sharing effective resources and techniques. 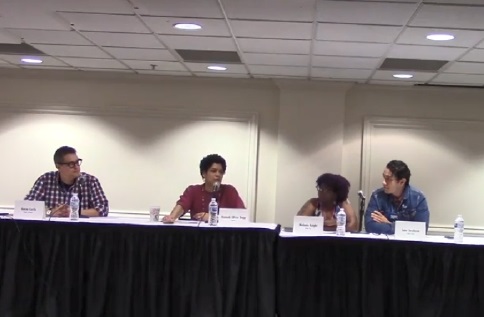 “Increasing representation and expanding your bookstore selection to include more books by diverse authors is an opportunity to increase sales,” said Curtis, who said that many Books & Books locations are in areas with large Latinx and LGBTQ communities. “When it comes to buying and curating sections to include books by diverse authors, it’s important to take a step back — literally.”

Depp, who said both WORD locations have diverse staffs, told booksellers that in order to make your book displays more dynamic, look at which books are face-out around the store and seek titles beyond the ones being pushed by publishers.

“Literally, you walk backward and take a look around your store and you might be surprised by what’s facing out,” said Depp. “It’s just that one extra step to make sure things look like you think they should look.”

Another way to make displays pop is to seek more input from your co-workers, according to Jacobson.

“Run the displays you create by your co-workers because you might have your own blind spots,” said Jacobson, who told booksellers that Flyleaf’s customer base is not as diverse as they would like it to be. “I know I’m certainly of guilty of that. When you throw up a display really quickly, sometimes things are so obvious that you’re missing.”

“You should also remember to put yourself in the customer’s shoes and think about the way they view the store when they walk in,” he added. “It’s kind of bittersweet, but I will never be able to go into a bookstore and see it the same way as I could before I was a bookseller, so separating yourself from that is important.”

Another tip for identifying and selling diverse books is simply to always try to engage in good hand-selling and buying practices, said Depp, like making sure to utilize your sales reps as much as you can.

“We all know that diversity has become a hot trend word to throw onto books now, so your sales reps might be bringing it up already, but you should let them know this is a priority for you, especially if you were thinking about rerouting a section,” said Depp. “That’s your rep’s job, and they would love to sell you their things.”

Another question booksellers might want to ask themselves is whether to separate out sections of diverse books within your store. Knight said she has an African American studies bay with multiple copies of both fiction and nonfiction titles, but those same books are also in the sections where they’re supposed to be found in the store.

“I also don’t separate anything out within the children’s section at all,” said Knight, whose customer base in Alameda is very diverse. “What I do is try to just make a regular display and highlight kids of color, kids with disabilities, same-sex parents. I just make it part of a normal display, not making it seem like you’re trying to sell any type of agenda, and a lot of the time those are the books that go first.”

While 15 or 20 years ago, separating out sections into African American and Latin American titles was an act of representation and recognition, Depp added, that’s not always the case today, especially depending on the store.

“There are definitely benefits to that, but I think you also need to look at the outline and the size of your store. If you have things in multiple sections and multiple locations, leave that in,” said Depp. “Separating things out might be good for your store, but for my store it would mean ghettoizing those things.”

Another key to successfully selling diverse titles is getting your booksellers to read as much and as widely as possible; talk with them about what they are reading, and make sure they write shelf-talkers for their staff picks, Depp added. A good book will always prove itself, and it is a bookseller’s job to be enthusiastic about the books they hand-sell, Knight agreed.

“The more enthusiastic you are about a book, it doesn’t really matter what the character’s skin color or sexuality is,” said Knight. “I don’t really even talk about that unless that’s what the book is about. I’m just enthusiastic, and when a customer sees that they’re more likely to want to buy something.”

“Sell the subject matter,” Curtis added. “You’re not just selling this book because it’s diverse — you’re selling it because you read it and you love it.”

Depp told booksellers it’s also important to sell diverse books to everyone, not just to people of color and not just to white people. Other ways to encourage people to buy diverse books include creating display tables with titles related to the current political climate, including strong women, #resistance, and other popular topics.

Bookstores are also encouraged to start unique book clubs on diverse topics, like the Queer Teens and Black Lives Matter groups at Books Inc., which are run by people in the community.

“For smaller stores that might feel intimidated about being responsible for all of these different book clubs, you can reach out to your customers and former employees to run them in some cases,” said Jacobson, who leads his store’s sci-fi/fantasy book club, which emphasizes diverse authors.

One way to maintain and cultivate a diverse clientele, said Depp, is to liaise with the community by going out and talking to people and disseminating flyers in a variety of places so that more people feel they are welcome at your store.