Wi13 Education: Morten Hansen Teaches Booksellers the Secret to Being “Great at Work”

At Winter Institute 2018, management expert Morten Hansen presented “Do Less, Then Obsess — Recognizing Your Store’s Strengths and Making the Most of Them,” an advanced education session for owners and managers looking to maximize their time. 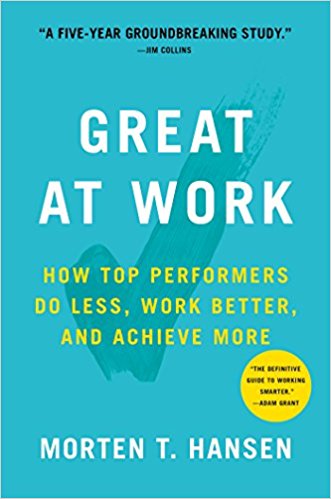 During the interactive session, Hansen, a professor of management at the University of California, Berkeley, advised booksellers to identify the work that their bookstore does best and then focus their energy on it. He drew from his new book, Great at Work: How Top Performers Do Less, Work Better, and Achieve More (Simon & Schuster), which looked at a longitudinal study of more than 5,000 managers and employees to come up with data that shows that people who do just one or two things but do them extremely well tend to achieve more than those who divide their focus among many different areas.

“What we found in research and case studies is that people often spread themselves too thin,” said Hansen, formerly a professor at Harvard Business School and INSEAD in France. “They do too many things: too many projects, priorities, meetings, e-mails, mail campaigns, social media campaigns.” For booksellers, this can mean constantly taking on new initiatives, from author visits to website improvements to offering cooking classes.

To illustrate this effect, Hansen, who is also the co-author of Great by Choice (Simon & Schuster) with Jim Collins, used the example of the famous 1911 race to the South Pole, when one team from Britain, led by British Navy Captain Robert Falcon Scott, and another from Norway, led by Norwegian explorer Roald Amundsen, competed to be the first humans to stand on the Pole. Each team had five transportation methods at their disposal: pulling sledges, skiing, using Siberian dogsleds, using Siberian horses, or motor sledges.

Scott, who had a bigger budget, decided to choose all five, said Hansen. As a hedging strategy, this maximizes the options in case one of the methods doesn’t work, while also lowering “portfolio risk” by diversifying the options at hand. However, having so many options also increases “execution risk,” meaning it is more difficult to become an expert at all five, and leads to “coordination costs,” since a high level of coordination is required to develop multiple skills. On December 14, 1911, Amundsen and his team, who chose to use only sled dogs, reached the Pole first, while Scott and his team arrived five weeks later, then perished on the return trip. In essence, said Hansen, Amundsen won by following the principle of “do less, then obsess.”

“But this is an anecdote, not data,” said Hansen. “In my book, we studied 5,000 people, and one of the key findings was that top performers were like Amundsen: they did one thing and did it exceptionally well. People like Amundsen were 25 percent higher in their performance rating than people like Scott.”

Hansen said that this strategy of “do less, then obsess” is even more helpful for smaller operations with fewer resources, like independent bookstores, than larger ones with lots of resources, like Amazon.

“This works at a small or large company,” said Hansen. “Apple is large, but even Apple has constrained resources. At a small company, it is even more difficult because you have fewer resources, so your strategy needs to have a clear purpose. What exactly do you want to accomplish? If you’re not obsessing, then you’re not going to excel in that thing and then somebody who does five things is going to beat you even though they are not exceptional at any of them.”

The question becomes: If focus is so important to performance, how should booksellers know what to focus on? Hansen told booksellers in attendance that they need to both discover what creates value within their store, and also to think up new ways to create value for their customers. Hansen used the example of a new manager who, when he started work at a shipping terminal in Tangiers, realized that too much effort was being expended on a variety of customer services, but the value that customers sought — getting their product where it needed to go safely and on time — remained underrealized. He saw then that developing a rerouting service would create more value for the shipping companies using the terminal.

Booksellers then need to ask themselves if they are focusing on the aspects of their business that produce the most value, said Hansen. Depending on the answer, they must eliminate or reduce existing activities of little value (for example, eliminating staff meetings if they have proven to be unproductive); resolve to spend more time on existing activities of high value, such as a children’s program that is particularly beloved by customers; and think about the things they are not yet doing that may be of high value to customers.

Booksellers also need to find out whether they are doing these value-producing activities with the maximum level of efficiency and achieving maximum results, Hansen said. A simple self check-up worksheet, which Hansen handed out to session attendees, can help stores figure out what area they should ignore or get rid of and which they should go all in on.