Bestselling writer Gary Shteyngart, whose forthcoming novel, Lake Success, will be published by Random House on September 4, appeared before booksellers at the 2018 Winter Institute in Memphis, where he spoke on his origins as a writer and the value of books and bookstores in today’s political maelstrom. 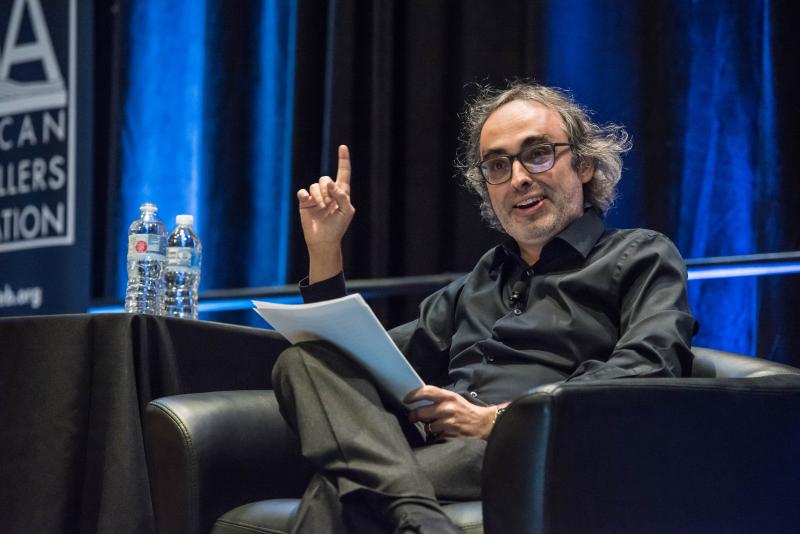 “Seeing so many booksellers in one place, it’s like taking a bath with a warm glass of milk in one hand and a glass of whiskey in the other,” Shteyngart told booksellers. “You folks are great. You, at this point, are performing a civilizational duty like the monks during the Middle Ages. You’re all that stands between us and complete darkness, or ‘complete Twitter,’ as I call it.”

After tossing out a few jokes and some hearty praise for the Memphis barbecue scene, Shteyngart gave credit to something else he loves: independent bookstores. In upstate New York, where he lives and writes, his favorite ones are Spotty Dog Books and Ale in Hudson and Oblong Books in Rhinebeck, where he treasures the experience of “just seeing all the new releases and remembering that we still live in a world of thoughts and feelings.”

Shteyngart, who immigrated to this country from Russia as a child, is the New York Times bestselling author of the 2014 memoir Little Failure (a National Book Critics Circle Award finalist) and the novels Super Sad True Love Story (winner of the Bollinger Everyman Wodehouse Prize), Absurdistan, and The Russian Debutante’s Handbook (winner of the Stephen Crane Award for First Fiction and the National Jewish Book Award for Fiction). His books regularly appear on best-of lists around the world and have been translated into 29 languages.

“Some say that literature has had its day in the sun and that it’s time to turn to Instagram or some other new technology, but to me, writing is this insane Vulcan mind-meld technology that lets you live inside the mind of another human being in a way that nothing else can: not TV, not film, no other medium, not even the Internet,” said Shteyngart. “You open a book and all of a sudden you’re entering the mind of a Ghanaian cab driver in Oslo or a melancholy stockbroker in London or a lovesick barbecue chef in Memphis…That’s going to be my next book, by the way.”

In this age of partisan rage and political divisiveness, reading performs a service needed now more than ever, said Shteyngart: it stretches our empathy muscle. While it may feel to some like fewer serious readers exist in the modern era, “the intensity of the connection between readers and writer has never been stronger,” said Shteyngart. “When I give a reading, I’m not just giving a performance — I’m doing social work without a license.”

Shteyngart said that while he now loves touring the country’s bookstores and meeting his readers, his first-ever reading outside of New York City, at a bookstore in Louisville, Kentucky, drew an audience of zero. Other formative experiences as a writer include browsing the stacks at the Strand Annex in the Financial District after a day of writing brochures at his job for a refugee resettlement agency in the 1990s. Earlier, as a young Jewish boy in Leningrad, his grandmother would promise him a piece of Soviet government cheese for each page he wrote; his very first story featured Lenin teaming up with a goose to plot a socialist revolution in Finland.

Shteyngart’s upcoming book, Lake Success, highlights the enormous material and psychological divide between the hyper-wealthy and the remainder of the country, and is his first novel starring a non-immigrant character, even though that character — Barry Cohen — is Jewish, married to a second-generation immigrant, and has a name similar to “Gary.” Both written and set during the summer before Donald Trump was elected president, Lake Success centers around Cohen, a hedge fund manager and 1-percenter who leaves his unhappy marriage to take a Greyhound bus trip across America, on the run from the SEC and in search of lost love. In the meantime, his wife, the daughter of Indian immigrants, begins a complicated affair with the Cohens’ downstairs neighbor.

Shteyngart told booksellers he was influenced in writing his new novel by the 50 or so cities he has visited on book tours over the years; these experiences with a broad swath of humanity also inspired him to take a Greyhound bus trip across America in the summer of 2016.

When Shteyngart was a child in Leningrad, his parents would pass around samizdat — pieces of reading material censored by the government that is reproduced and circulated in secret. The possession of such material could merit harsh punishment, and his parents’ reverence for this samizdat reinforced the idea that books were sacred objects, that the ideas within them mattered.

“So,” he concluded, “when I hear that more independent bookstores are opening up around the country, I think that people are saying ‘no’ to that sentiment. People are saying that things still matter and the very act of putting down your phone, turning off your Twitter, going into a bookstore, talking to a bookseller, and then retreating to a quiet private space to mind-meld with another consciousness, that becomes a political statement. Not one as fraught with risk as when my parents passed around the samizdat books back in Leningrad, but one just as important, just as sacred, and just as capable of changing the world around us.”