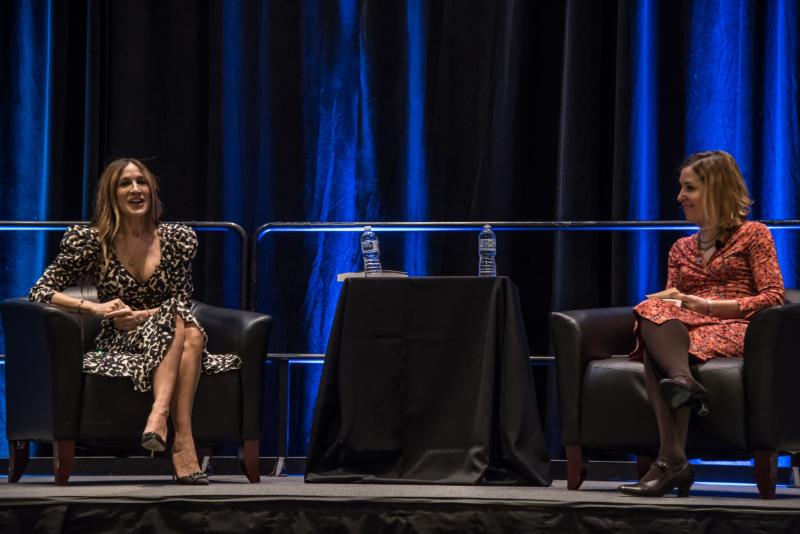 Sarah Jessica Parker with Pamela Paul at the 2018 Winter Institute

The actress, producer, designer, and mother of three, who currently produces and stars in the HBO comedy series Divorce, started the imprint in partnership with Crown and Hogarth publisher Molly Stern. In her new role, Parker will acquire and curate works of fiction that reflect her literary tastes and will be involved in the editorial and publishing process.

At the January 23 keynote breakfast, Paul, who also oversees book coverage at the New York Times, asked Parker why she decided to add a brand-new enterprise — publishing — to her busy schedule. In the early 2010s, Parker said, Stern befriended her at a luncheon and later gave her a galley of A Constellation of Vital Phenomena by Anthony Marra, which Stern had edited. Parker fell in love with the novel, and the two women were inspired to start their own book club; later, Stern offered Parker the chance to launch her own imprint.

The first title from SJP for Hogarth, to be released June 12, is A Place for Us by 26-year-old debut author Fatima Farheen Mirza, who signed copies of her book at this year’s Winter Institute Author Reception. Parker told Paul she thinks that this first book, about an Indian Muslim family and their children’s search for belonging in America, closely represents the imprint’s mission.

“I feel especially fortunate for it to be our inaugural publication,” said Parker, who also serves as the honorary chair of the American Library Association’s Book Club Central. “We feel so strongly about this book. We’re so enthusiastic about it and about her career, about Fatima’s life as a writer and her voice. We think [this first book] does tell the story of what we’re trying to do with this small and beautiful imprint. Hogarth has a very important history, important to me, and I mean to do right by this opportunity. I think Fatima’s story makes clear very quickly what my intentions are.”

Since both theater and literature rely on the principles of storytelling, Parker’s editorial sensibilities have been honed by reading scripts and working as an actor since the age of eight. As head of the imprint, Parker works with two Hogarth editors as a sort of layman reader who is able to step outside the immediate editorial situation and evaluate the story as a whole.

More broadly, the imprint, Parker said, is guided by the principle that in a saturated landscape, a story has to be deserving of people’s time since there is so much to compel us in different directions. Said Parker, “The word becomes so important: what is the story I’m telling? Is it worthwhile? Is it worth anyone’s time? Is it good enough? Is it saying something new? Is it honest?”

Storytelling and writers, Parker said, are essential to our lives in that they make us better people and connect us to one another, and she appreciates the great responsibility that comes with introducing emerging voices in literature, especially those that have gone unheard in the past.

“I like global voices because I feel that they take me to a world, especially when well-written, that I just don’t know and perhaps would never come to know if it weren’t through this gateway, the portal being the book,” said Parker. “I guess I’ve always enjoyed escaping, in a way, and the more that escape takes me to a place that is real, the more fulfilled I feel, the more connected, the more moved I am. I feel like it’s a way of being in touch with other people, learning other stories, knowing other, far-flung places.”

“For me, especially now,” she added, “it’s more important than ever. It’s urgent, it’s vital that we keep looking for stories to connect us; as this sort of canyon exists and pushes us apart here in this country, I think it’s incumbent upon us that we know other people.”

According to Parker, the original author of her reading life was her mother, a former teacher and dedicated reader who always encouraged her eight children to keep a book with them at all times. Books she loved as a child include titles by Laura Ingalls Wilder and Judy Blume, as well as From the Mixed-up Files of Mrs. Basil E. Frankweiler, which Parker said colored her personal relationship with books at an early age.

“Among many things my mother did, I’m so grateful that she made us read because, for me, I think it just opened up so many doors,” Parker said. “I think the most important thing is that it cultivated curiosity in me; it made me a curious person about the world. I think that’s maybe one of the great gifts outside of just teaching your kids to be decent people: to be curious people, because I think that’s the gateway to opportunity.”

When asked about the role of indie bookstores in her life, Parker told Paul that she’s a huge fan of her local New York City bookstore, Three Lives & Company. Independent bookstores, she said, are entities that hold communities together and help them grow, change, and prosper.

“I think of bookstores as the beacon of the community; I think of them as the connector,” Parker said. “I just think they are necessary: it’s the way we meet other people, the way we make new friends. I think it’s a particular kind of shelter that is unique and necessary.”

Parker concluded by thanking booksellers in the audience for the myriad ways they elevate and support books and writers. “Thank you for everything you do and for changing the way we look at books and talk about books,” she said. “I feel so privileged to be among you all.”