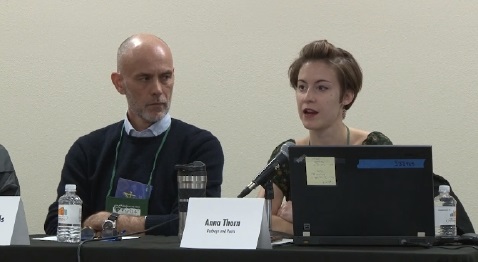 In the session, booksellers who participated in previous years of the program discussed the practices they have brought back to their stores from their experiences with the fellowship program, which in part seeks to help U.S. booksellers develop concrete ideas for increasing sales of diverse and international literature in the indie market.

This year, in addition to the Turin Book Fair in Italy and the Frankfurt Book Fair in Germany, the Bookselling Without Borders program is expanding to include the Istanbul Book Fair, the Bologna Children’s Book Fair, and a residency in India that includes the Jaipur Lit Fest and Delhi Book Fair. Participating booksellers will be treated to customized itineraries of specially developed panels, meetings, seminars, and receptions with their international counterparts, authors, and publishers.

The panelists for “Selling International and Diverse Books” included Michael Reynolds, director of Europa Editions, a publisher in international literature based in New York City, who conceived of the program, as well as Christie Henry of Princeton University Press in Princeton, New Jersey, one of the program’s partner publishers. The program is also supported by Ingram Content Group, Shelf Awareness, and the participating book fairs, as well other publishers, including Catapult, Counterpoint, Graywolf Press, Grove Atlantic, Melville House, Milkweed Editions, Other Press, Rutgers University Press, Seagull Books, Seven Stories Press, Soft Skull, Shambhala Publications, and the University of Chicago Press.

Said Reynolds, “The publishers that support the program are all publishers of international books, and a lot of books in translation. We want those books to be more visible in the market, and we understand that booksellers are an absolutely vital link in making that happen. And so we want you to be better informed, better connected, and more involved in the international book scene.”

According to Reynolds, the idea for the program really came into focus at Winter Institute 2017 in Minneapolis, during which the Trump administration announced that it was banning nationals from seven predominantly Muslim countries from visiting the U.S. and everyone, from the booksellers to the publishers to the other industry professionals in attendance, was asking themselves what their role was in this current political moment. As an answer to this question, ultimately, Bookselling Without Borders was born.

Henry said she recognized the benefits of participating in the new program right away. “For ecosystems to thrive, there needs to be a routine flow of nutrients, and in our ecosystem, those nutrients take the form of books, but they also take the form of knowledge. I think BWB provides some excellent new pathways for that nutrient flow and will be really essential to our future resilience and ongoing evolution,” said Henry. “I also think I would find a lot of consensus here that our global political leaders are not doing enough to build collaborations. In fact, they are throwing up walls and obstacles, particularly around the exchange of knowledge. It is up to us to build those pathways and build new partnerships and coalitions to counter the pressures our governments are putting on all of us to stop that flow.”

The booksellers on the panel had all previously attended international book fairs as guests of the program: Stefani Beddingfield, owner of Inkwood Books in Tampa, Florida; Lyn Roberts, co-owner of Square Books in Oxford, Mississippi; David Sandberg, co-owner of Porter Square Books in Cambridge, Massachusetts; and Anna Thorn, formerly of Busboys and Poets in Washington, D.C. Thorn is now the program coordinator for Bookselling Without Borders.

Sandberg, who attended the Turin International Book Fair in Italy during the program’s first year, said that, for him, the trip came at the perfect time. He had also felt moved by his experience at Winter Institute, especially the keynote by author Roxane Gay that forced booksellers to examine what they personally were going to do to affect change in these divisive political times.

“One of the things that was fairly obvious that we could do as booksellers is to talk about certain types of books, books that are broader in viewpoint and more diverse in viewpoint than what we were used to selling and our customers were used to buying,” said Sandberg. “We’re a bookstore where, while many people come into the store knowing exactly what they want, I think an equal or greater number come in asking us what they want. Part of the answer to that question was learning how to think more broadly about what we were reading and selling to our customers, because they look so much to us to make those recommendations.”

At the fair, Sandberg and other fellowship winners got to socialize with staff from Edizioni E/O, an independent Italian publisher with strong connections to Europa Editions, and set up a sales booth to hand-sell American-published English-language titles to Italian readers from their own curated list. Sandberg said he felt like the program allowed him to “get caught up in every aspect of that book culture, from booksellers to writers to editors to publishers to the Italian book-consuming public.”

Thorn, who attended the Turin Book Fair as part of BWB in 2018, told booksellers she was so moved by the experience that she adjusted her career trajectory and now works as a coordinator for the program. Although her store had always focused on curating a range of diverse titles for displays, Thorn said she had never really looked at international literature as its own category of diversity. That changed, however, after her experiences in Turin meeting foreign publishers, participating on a panel with other international booksellers, visiting indie bookstores in the area, and spending long nights bonding with the other fellowship winners.

“At Busboys and Poets, we feature lots of types of diversity on our shelves and that was very intentional, of course. But this put international literature on that list in a bigger way and gave me the confidence to follow through on the decision to intentionally have international books not only on shelves, but on the displays, and to talk to my booksellers about it,” said Thorn.

Roberts, who won the chance to attend the largest of the fairs, the Frankfurt Book Fair, described her experience as a rejuvenating one. Since the fair was so large, she and the other fellowship-winning booksellers were chaperoned by different U.S. publisher sponsors at different points of the fair.

“We walked around together and shared our experiences and reactions to the different things that we learned; we met with some of our great U.S. publishers, like Princeton, and some of the other sponsors but also some international publishers. And we were meeting with the editors and the people who were buying rights, so it was a different part of publishing than we normally talk about,” said Roberts.

Beddingfield, who attended the Guadalajara Book Fair in Mexico, said her experience was a bit more loosely organized than other fairs, as she and the other fellowship winners spent more time walking through the city, visiting local indie bookstores, and experiencing the local food and culture. After the fair, Beddingfield shipped about 20 beautifully illustrated children’s books back home, and although she did not tell her customers they had come all the way from Mexico, the titles sold out quickly.

“Going into this festival and seeing the countries represented and how many books there are was just very humbling. You realize how much you don’t actually know at all. I think that is the best thing about it,” said Beddingfield.

To wrap up the session, Thorn told booksellers how Bookselling Without Borders had impacted her life and changed her sense of the influence she wanted to have on the industry.

“It was something that changed the trajectory of my career and made me think differently about what I wanted to do in bookselling, which is pretty impressive for a one-week program,” Thorn said. “Within my store it had an immediate effect on frontlist titles…It only takes one person at a bookstore to change how one genre is sold; it has a ripple effect throughout the store.”

The application period for Bookselling Without Borders’ 2019 fellowships, opened on Wednesday, January 16, and is now closed. For further information about the program, contact Thorn at booksellingwithoutborders@gmail.com or (202) 386-0804.