Hanif Abdurraqib, whose book Go Ahead in the Rain: Notes to A Tribe Called Quest will be published by the University of Texas Press on February 1, is set to appear as a keynote speaker at the American Booksellers Association’s Winter Institute in Albuquerque this month. 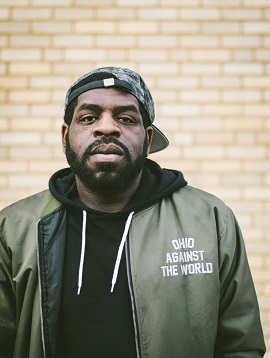 A blend of personal experience and history, Go Ahead in the Rain is Abdurraquib’s chronicle of A Tribe Called Quest, the visionary, award-winning hip-hop group whose jazz-infused records and socially conscious lyrics revolutionized rap in the early 1990s.

Abdurraqib is a poet, essayist, and cultural critic from Columbus, Ohio. The Crown Ain’t Worth Much (Button Poetry, June 2016), his first full-length poetry collection, was a finalist for the Eric Hoffer Book Prize and nominated for a Hurston-Wright Legacy Award. His first collection of essays, They Can’t Kill Us Until They Kill Us (Two Dollar Radio, November 2017), was named a book of the year by Buzzfeed, Esquire, NPR, Oprah Magazine, Paste, CBC, the Los Angeles Review, Pitchfork, and the Chicago Tribune and was a December 2017 Indie Next List pick. His next project is They Don’t Dance No Mo’, due out from Random House in 2020.

Here, Bookselling This Week talks with Abdurraqib about music and memory.

Bookselling This Week: What will you be talking about in your keynote speech at Winter Institute?

Hanif Abdurraqib: The main thing I want to talk about in my keynote speech is the writer’s relationship with memory, as well as the romantics of memory and how the things we consume in our youth shape our worldview, and, more importantly, at least for me, how books and bookstores and libraries play into that. A portion of my book is about my musical discovery being through the library system because I borrowed CDs from there when I couldn’t afford them. The relationship to memory is really tied to every thread in this book. It’s not just about A Tribe Called Quest, it’s about growing up and trying to shape myself as a consumer of culture with a mind toward not only what I was consuming, but how it allowed me to view the world differently. 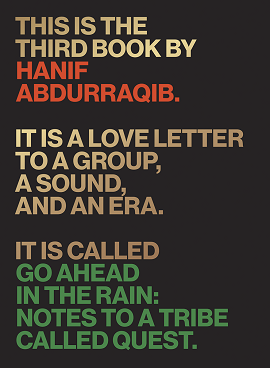 BTW: Can you share some of your early experiences listening to A Tribe Called Quest? Why did you decide to write about them?

HA: I really wanted to write about A Tribe Called Quest because I noticed that after Phife Dawg died, they announced they were working on a final album, which was released the same week that Donald Trump was elected. It felt as though people were treating that album, and by extension treating their career, as a moment. When it comes to popular culture and music, everything is kind of whizzing by and people hold on to it for a brief moment before letting it go. I wanted to be able to archive the history of A Tribe Called Quest as I saw it and as I felt it by living it. Not as an expert, but genuinely as a fan who was trying to reach other fans.

BTW: Has your relationship to A Tribe Called Quest’s music changed since writing this book?

HA: My relationship to music is tied a lot to childhood, and it is tied a lot to memory, and it is tied a lot to an entire ecosystem, not just the songs. It’s also tied to the summer of 1996, or the way it felt to make a physical mixed tape to put in a cassette player. To revisit their music just through the lens of the music was a little bit jarring and unique in some ways, but it didn’t change how much I loved or cared about the music. It mostly changed how much I thought more deeply into the way the music was constructed in every corner of the emotional space that I was going through while listening.

BTW: You write about the song “I left My Wallet in El Segundo” and your memory of a time that you lost your wallet on a road trip in Texas. Do you think this experience, like having a particular song for a particular moment, translates across different types of media?

HA: I think there are many people who don’t want to have a single and silent standalone moment that they’re moving through, and they’re often looking for things to soundtrack or add another layer of beauty to their lived moments. I think, of course, the soundtrack is in some way anything that enhances, adds clarity, or rescues someone from a lived experience. A lot of the human condition is tied to the desire to not be alone or feel alone. And if a person is looking for that, there are tons of outlets that are not just other people. In my work, I’m often trying to look for other things that make me feel like I’m not experiencing the world alone. I’m looking for stories everywhere that tell me what I’m living is not a singular and isolated experience.

BTW: Throughout the book are letters to each of the members of A Tribe Called Quest, as well as one to poet Cheryl Boyce-Taylor, Phife Dawg’s mother. How did you craft these letters and how did you decide where exactly to place them in the book?

HA: I wanted to space out the book and give it some kind of narrative arc, so I placed them where I felt like I had the most questions or where I was doing the most questioning about the group, myself, and my relationship to the group, as well as in the place where I felt there was some shared history. I lost my mother and thought it would be important to try to find myself in conversation with Cheryl Boyce-Taylor, who lost a son. I wanted to write directly to Phife in different moments of his arc and life. I wanted to write to them at the height of the greatest tension in the group because I know what it is to have people so close to you, that you love very deeply, but fight with nonetheless — and fight for. I wanted to put myself in a position where I was really in conversation with people and times that felt useful to moving the book forward.

BTW: What have your experiences with indie bookstores been like?

HA: I live in Columbus, Ohio, and there are three great indie bookstores here. I kind of grew up in the backyard of indie bookstores; in some ways, those were the only bookstores I knew. In particular, the people who tend to work in indie bookstores are very passionate about reading, so I find that the conversations booksellers have in those spaces and the way those spaces feed their communities directly are of immense interest to me. If I go to give a reading in an indie bookstore, I feel like I’m getting a true look at the community that bookstore exists in and the interests of that community and the spirit of that community, and that means a lot more to me than anything else. The Midwest is a really great hub for indie bookstores; I think a lot about the Twin Cities and the indie bookstores there and in Chicago, where there’s a great big sprawl of them. There are bookstores in the really disparate parts of the Midwest that are serving a lot of different faces and a lot of different places, and that’s really singular and worthwhile.

Abdurraqib’s afternoon keynote will take place in the Kiva Auditorium in the Albuquerque Convention Center from 3:25 p.m. to 4:25 p.m. on Wednesday, January 23, 2019.

Winter Institute 14 is made possible by the general support of lead sponsor Ingram Content Group and from publishers large and small. See the full Winter Institute program here.