The Book Industry Charitable Foundation’s “Heads or Tails” fundraising game at this year’s Winter Institute in Memphis garnered $7,700 for the organization, which the American Booksellers Association chose as the annual event’s first-ever featured charity.

Booksellers attending the institute could choose to purchase one or more flashing pins for the chance to guess the results of a series of coin tosses and raise money for the organization, which helps booksellers in need of emergency financial assistance. Binc Executive Director Pamela French said the fundraising goal for the event, held Thursday, January 25, during the Winter Institute Closing Reception, had been $5,000, so the results surpassed their expectations.

“Once again, book people prove they are the best people around!” said French. “There were 400 pins and we sold the entire supply. Since some book people purchased more than one pin, it’s not entirely clear how many participated, but we believe it was over 300 people.”

The winner of the night’s grand prize, a $500 American Express gift card, was Gibran Graham, owner of The Briar Patch in Bangor, Maine.

“If the prize had been cash, I would have turned it right around and donated it back to Binc. Since it was in the form of Amex gift cards, I’m looking for a positive way to pay it forward, perhaps with our local literacy organization,” Graham said.

Binc has hosted a “Heads or Tails” game at the SIBA Discovery Show for the past two years, and those proceeds have allowed it to cover multiple grant requests for booksellers, French said.

“Since the ABA generously underwrote the cost of the event (the pins and the gift card), all proceeds from the game at Winter Institute will go toward financial assistance grants for booksellers,” French told Bookselling This Week. “Thanks to everyone who purchased a pin or donated directly, these funds will cover up to four booksellers needing assistance.” 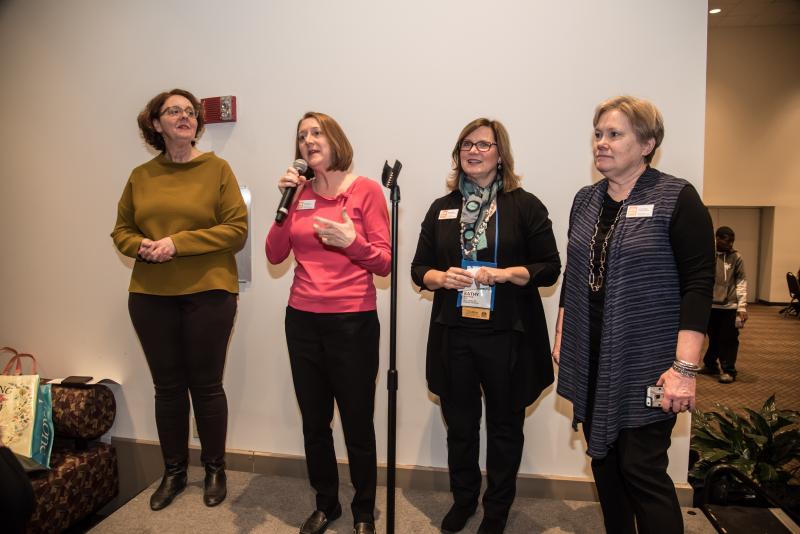 In advance of the evening’s event, Binc staff and selected volunteers sold the pins, which were shaped like guitars and musical notes to represent Memphis’ musical roots. A $20 donation bought one flashing pin, giving the purchaser a single chance to play and win the grand prize, and $35 bought two pins, equal to two chances to win.

To play, everyone who bought a pin stands up, a coin is flipped, and each person publicly indicates their guess by placing their hands on their “head” (head) or “tail” (backside). Each flip eliminates those who guessed wrong, and the last person left standing wins the game.

“There was an enthusiastic crowd for the game, and it was wonderful to watch the competitive nature of the crowd as it became smaller and smaller,” said French. “It was all great fun, and I’m glad it was enjoyed by everyone who supported Binc.”

Binc Programs Manager Kit Steinaway told BTW that the event was a bigger success than they had imagined it would be. “Never underestimate the willingness of booksellers to support each other and to have fun doing so,” Steinaway said.

In 2017, the number of requests to Binc due to natural disasters was more than the organization had ever seen. In addition to the $7,700 raised at Winter Institute, Binc was also able to collect more than $35,000 as part of its year-end #MoreThanEver fundraiser, which ended December 31. 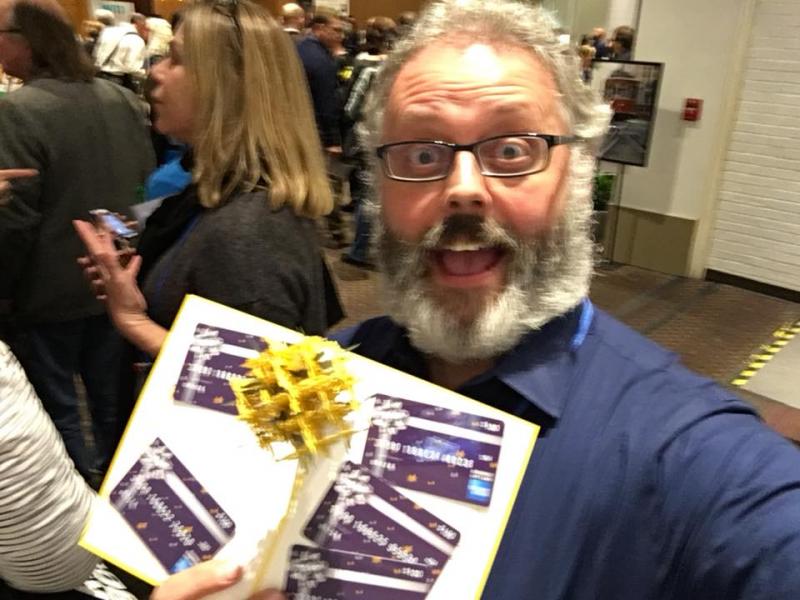 Heads or Tails winner Gibran Graham of The Briar Patch in Bangor, Maine

“We were honored to have been selected as the Wi13 charity,” French said. “Having Binc highlighted in this way has already helped booksellers by continuing to expand awareness, and also very directly with the funds donated.”

To donate to the organization, visit Binc’s website. Booksellers who are currently in need of emergency assistance can contact Binc at (866) 733-9064 or help@bincfoundation.org.